Paris-Charles de Gaulle: ready to handle the A380

In a few months’ time, Paris-Charles de Gaulle will be one of the first airports in the world to accommodate the new jumbo Airbus A380 on a daily basis. Aéroports de Paris has been gearing up for years to accommodate this type of aircraft and Paris-Charles de Gaulle airport is ready for the commercial operating of this aircraft, exceptional in many ways. 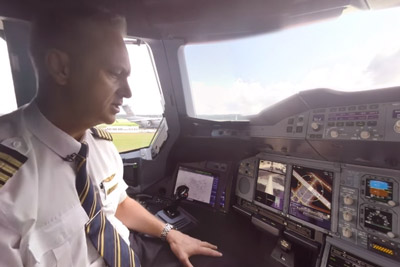 In a few months’ time, Paris-Charles de Gaulle will be one of the first airports in the world to accommodate the new jumbo Airbus A380 on a daily basis. Aéroports de Paris has been gearing up for years to accommodate this type of aircraft and Paris-Charles de Gaulle airport is ready for the commercial operating of this aircraft, exceptional in many ways.

In total, Aéroports de Paris invested around 100 million euros in order to accommodate new jumbo aircraft such as the A380, the B777-300ER and the A340-600. Regarding the A380, the aircraft specifications have been integrated into the development of the airport without resorting to heavy changes in the aeronautic infrastructure. Hence, since 1997, all new developments have been made in conformity with this type of aircraft, whether new runways, taxiways or boarding lounges such as “la Galerie Parisienne” which was unveiled in June 2007. In parallel, older facilities have been upgraded according to a specific standard, relating to the A380, defined at European level.

The arrival of the A380 represents a real asset for Aéroports de Paris and is part of the industrial strategy of the group. Indeed, this aircraft can carry a larger number of passengers and thus contributes to the optimisation of our airport capacities, while respecting the environmental demands. The A380 participates in reinforcing the competitiveness of the Paris-Charles de Gaulle hub.

With its outstanding geographical position and strong trading area, the group is implementing a strategy to expand its passenger-handling capacities and improve its quality of service. It also intends to develop its retail and real estate business. In 2006, Aéroports de Paris earned ?2,076.8 million in sales with net results of ?152.1 million and handled 82.5 million passengers at its airports.