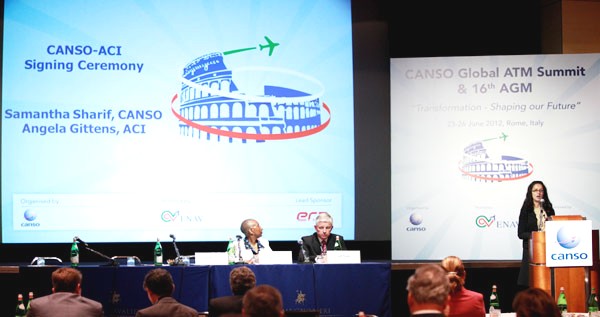 The agreement was signed at the CANSO ATM Summit, kindly hosted by ENAV S.p.A. in Rome from 23-26 June. The event attracted more than 270 air traffic management (ATM) and aviation leaders to discuss the future of the ATM system.

CDM is a management tool which facilitates the exchange of data between the airport terminal and air traffic management systems. It enables all stakeholders to monitor network demand, capacity and constraints, helping them take better informed decisions under rapidly changing operating conditions.

As a result, aviation system inefficiencies can be reduced, which in turn benefits all stakeholders involved in moving people and cargo from one location to another. Airports and airspaces operating close to maximum capacity also benefit from increased resiliency and predictability, as well as improved quality of service.

CANSO Director General (Interim) Samantha Sharif said: “By improving the flow and quality of information between ANSPs, airports and other key stakeholders, A-CDM can deliver significant efficiency improvements across the board, from passenger processing, to customs and immigration, to reduced fuel use. CANSO is delighted to partner with ACI and we look forward to working together to promote A-CDM implementation worldwide.”

Angela Gittens, Director General of ACI World said: “Airports are central to making A-CDM work and we are committed to this partnership with CANSO to bring enhanced efficiency, resiliency and improved quality of service to all our customers. This increased level of collaboration with CANSO is important to facilitate the global roll out of A-CDM and demonstrates that our partnership is working for the betterment of the entire aviation industry.”

Under the terms of the MoC, ACI and CANSO agree to work together to: