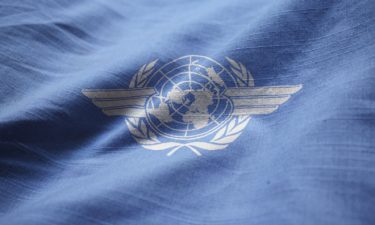 Benjamin addressed a packed news conference at Rio’s Santos Dumont International Airport upon debarking from the fourth and final flight in his journey. Present with him were Brazil’s Minister of Development, Industry and Foreign Trade, Fernando Pimentel, and Chief Minister of Brazil’s Civil Aviation Ministry, Wagner Bittencourt.

The three were also joined on the occasion by Marcelo Guaranys, Director-President of Brazil’s National Civil Aviation Agency and by representatives of GOL and Boeing, partners in the last flight, and Paul Steele, Executive Director of the Air Transport Action Group (ATAG).

“I am proud to have been able to serve as a symbolic passenger on this ‘Flightpath to a Sustainable Future’,” Benjamin commented.

Jane Hupe, ICAO’s Chief, Environment Branch, provided details on the landmark initiative, highlighting the invaluable contribution of the airlines, manufacturers, fuel developers, airports and other industry groups who have helped to make the journey possible and successful.

Benjamin left Montréal’s Pierre Elliot Trudeau Airport on Monday morning aboard a Bombardier Q400 flown by Porter Airlines and powered by a camelina blend. He connected later that day on an Air Canada Airbus A319 using a cooking-oil based fuel supplied by SkyNRG to Mexico City, where a Boeing 777-200 flown by Aeroméxico and powered by an ASA-supplied jet fuel using camelina, jatropha and used cooking oil took him to São Paulo, Brazil.

The last leg of Benjamin’s pioneering journey saw him flown by Brazil’s GOL Airlines the following day aboard a Boeing 737-800 using fuel derived from inedible corn oil and used cooking oil. The fuel for this leg was supplied by UOP, a Honeywell company.

While there are very small quantities of sustainable aviation biofuel available to airlines today, near-term government assistance to producers should help them deliver higher quantities that are cost-effective and respectful of recognized sustainability criteria.

“As our world continues to interconnect across borders and boundaries, fostering new opportunities for mobility and trade and enabling increased prosperity and hope in the world‟s developing economies, it is imperative that we temper the climate impacts of our growth with environmentally-focused innovation,” Benjamin stressed. “These flights are one of the many steps aviation is now taking in that direction.”