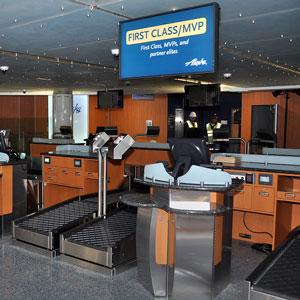 The 13-month LAX construction project was a collaborative effort among the airline, Los Angeles World Airports (LAWA) and the Transportation Security Administration. After breaking ground in February 2011, the $238-million project was completed on-time and $33 million under the original $271-million budget.

“Alaska’s Terminal 6 is an example of what can be achieved when government and private business partner. The renovation, delivered on time and under budget, is part of L.A.’s $4.1-billion investment in modernizing LAX,” said Mayor Villaraigosa. “In addition to dramatically improving the travel experiences of both domestic and international passengers, the Alaska Terminal 6 project also supported over 1,000 jobs in our region.”

City Councilmember Bill Rosendahl, whose 11th District includes LAX and who is vice-chair of the City Council Trade, Commerce and Tourism Committee, said, “It’s fitting that Alaska Airlines has brought its innovative new designs to Los Angeles, home of the original ‘Airport of the Future.’ Score another round to stunning progress, cooperation, and job growth in our ongoing efforts to modernize LAX, the largest origin-and-destination airport in the world.”

“We want Alaska to be the easiest airline to fly on, and our new terminal in Los Angeles epitomizes our mission to make travel hassle-free and seamless for our customers,” said Bill Ayer, Alaska Airlines’ chairman and CEO. “Our new terminal provides more room for passengers to roam, swifter passage to the security checkpoint, more convenient connections to international flights and access to electrical outlets throughout our gates. These state-of-the art amenities remove some of the traditional barriers between air travelers and where they want to go.”

LAWA Executive Director Gina Marie Lindsey said, “This is an important milestone in the continuing modernization of LAX. The partnership with Alaska Airlines has enabled significant improvements in customer service and convenience for the traveler.”

The New “Airport of the Future” Check-in Process

According to Alaska Airline officials, the innovative design is expected to reduce average customer wait times from 20 minutes to typically less than four minutes, as it has in Anchorage and Seattle where the carrier already uses the “Airport of the Future” design. Today, more than 70 percent of the airline’s customers check-in online, on a mobile device or at a check-in kiosk, which are available at almost all of the 92 airports Alaska serves.

Other features of the renovated Terminal 6 include a new Board Room airline lounge, electrical outlets at half the seats in spacious boarding gate areas, a central service counter, and new state-of-the-art gate information displays. The construction project also incorporated many sustainable building practices in accordance with Leadership in Energy and Environmental Design (LEED) certification by the U.S. Green Building Council. The airline’s Board Room was LEED-designed with numerous energy-efficient and environmental features including low-flow water fixtures that reduce consumption 30 percent compared to traditional fixtures, energy-efficient lighting systems and Energy Star-certified appliances.