The Wayne County Airport Authority (WCAA) Board has elected Mary L. Zuckerman to serve as its chairperson in 2012… 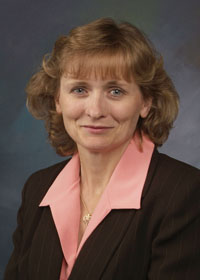 The Wayne County Airport Authority (WCAA) Board has elected Mary L. Zuckerman to serve as its chairperson in 2012. The seven-member Board oversees the operation of Detroit Metropolitan Airport (DTW) and Willow Run Airport (YIP), which together comprise Michigan’s busiest airport system and the anchors of Southeast Michigan’s Aerotropolis development initiative.

“Mary is widely respected for her business acumen and strong leadership, and I look forward to working with her and her fellow board members as we chart a course for the Airport Authority’s exciting future,” said WCAA Interim CEO Tom Naughton.

Zuckerman, a Livonia resident, is executive vice president and chief operating officer for the Detroit Medical Center (DMC), where she oversees operations of all DMC hospitals and numerous corporate functions including construction, revenue cycle, laboratory, retail pharmacy, nutrition services, radiology, customer service, the chief nursing office and Certificate of Need. She joined DMC in 2004 following eight years with Wayne County, where she rose to become Deputy County Executive responsible for the day-to-day management of all Executive Branch Departments and a budget of $1.5 billion. She holds a master’s degree in public administration from Northern Illinois University and a bachelor’s degree from Winona State University.

Appointed to the Board by then-Gov. Jennifer Granholm to a six-year term in 2008, Zuckerman was elected unanimously by the Board to serve as its next chair at its last regular meeting of the year held Wednesday. At the meeting, the Board also moved to table the election of a vice chair and secretary to its next meeting in January.

Established in 2002 by the Michigan State Legislature, WCAA is an independent agency responsible for the management and operation of Detroit Metropolitan Airport and Willow Run Airport, which together comprise Michigan’s largest airport system and one of the world’s busiest air transportation hubs. Studies conducted by the University of Michigan-Dearborn in 2005 and 2007 found that the two airports contribute an estimated $7.8 billion to the state economy each year and are responsible for as many as 72,000 Michigan jobs. The Airport Authority is overseen by a seven-member Board appointed by the Wayne County Executive, the Governor of Michigan and the Wayne County Commission. The Airport Authority is completely self-sustaining and does not receive any tax dollars for airport operations. For more information about WCAA and its airports, visit www.metroairport.com.