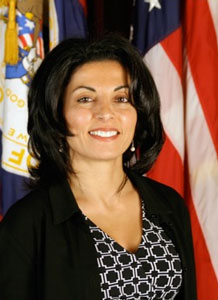 The CEO is responsible for the strategic direction, management and administration of the authority, which governs the operations of Detroit Metropolitan Airport and Willow Run Airport.

“We have selected an outstanding CEO who will provide strong leadership and a dynamic vision for Metro and Willow Run Airports,” said Suzanne Hall, a WCAA board member who chaired the CEO search process. “Turkia Mullin definitely possesses the qualifications and leadership ability to give our airports a competitive edge over other North American airports. She will be very attentive and responsive to the needs of our airlines and tenants and will provide disciplined fiscal oversight of our operations.”

“Delta Air Lines congratulates Turkia Awada Mullin on her selection as the new CEO of Wayne County Airport Authority, and we look forward to working with her and the Board to continue to improve the efficiency and operation of Detroit Metro Airport. We thank the Board on moving quickly and efficiently to fill this critical position,” said Andrea Newman, SVP of Delta Air Lines.

In addition to seeking a senior executive candidate with a superior command of public sector financing, construction, facility management and operations, a top priority of the board was selecting someone with comprehensive economic development experience.

“We have built one of the world’s most modern, efficient and user-friendly airports with one the highest customer satisfaction levels in the industry,” Hall said. “We have selected a CEO that can maintain and build-on these high standards of excellence while also looking inside and outside the airport proper for new economic development opportunities.”

“During our interview process, Turkia expressed a thorough understanding of how Metro can realign airport concessions and make airfield capital improvements to generate more revenue and better serve airport passengers and corporate clients,” Hall said. “More importantly, she identified strategic partners and funding sources that can help make this happen without significant investments by the airport.”

With Wayne County, Mullin has been responsible for re-engineering a county government that is contending with multi-million dollar deficits brought about by declining revenues. She has managed multi-million dollar construction projects, completing them on time and under budget, and has also negotiated complex real estate, leasing and development agreements.

A veteran of the U.S. Army, Mullin received her bachelor’s degree in accounting from Wayne State University and her juris doctor degree from the University of Detroit Mercy Law School.

She was a lawyer in private practice before joining Wayne County’s Corporation Counsel in 2003 as a principal attorney for real estate. She was named assistant chief executive officer in 2005 and added the duties of chief development officer in 2009.

Mullin has led an economic development team that has brought in more than $5.5 billion in private sector investment to Wayne County, including General Electric and Vanguard’s acquisition of the Detroit Medical Center. Her efforts earned Wayne County national recognition from Site Selection magazine, which ranked her department as one of the top 10 economic development agencies in the nation.

She also oversaw the purchase and renovation of the Guardian Building and helped advance the Cobo Hall expansion and modernization project and the Detroit Aerotropolis Development Corporation.

Mullin will replace Genelle Allen, who has served as interim CEO for the past year. A former executive vice president of the WCAA, Allen informed the board at its May 26th board meeting that she did not want to be considered as the permanent CEO.

“The board would like to thank Genelle Allen for her dedicated leadership as interim CEO during the past year,” said WCAA Board Chair Rene Pipis Axt. “Ms. Allen did an excellent job and we look forward to her future contributions as part of our management team.”

At that May 26th meeting, Axt announced that the board would be conducting a national search for a new CEO. She also assigned three board members — Hall, Charlie Williams and Sam Nouhan — to the lead the process to search and select a new CEO.

Drawing on airline industry best practices, the group put together a job description that was patterned after one authored by Tampa International Airport, which recently concluded a search for a CEO.

Trustinus launched a national search, posting the position on leading industry job-posting websites. The firm reviewed 61 candidates from across the country that either submitted resumes or were contacted directly by Trustinus. Trustinus conducted extensive interviews with 30 candidates and recommended six finalists that were interviewed by the work group. Two finalists were from Michigan and four were from other states and the District of Columbia.

“We did a thorough due-diligence during our search process and interviewed world-class airport operations and economic development officials,” said Hall.

Mullin and WCAA board will now negotiate her compensation package and determine her starting date as CEO.