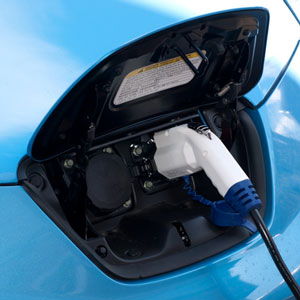 DTE Energy is working with General Motors through a U.S. Department of Energy (DOE) grant to accelerate the transition to electric vehicles in the U.S. by deploying vehicles and installing charging infrastructure.

“This is another step we’re taking to ease the transition to PEV ownership, as well as meet the demand for infrastructure by current PEV owners,” said Trevor Lauer, DTE Energy vice president, Marketing & Renewables. “A key factor in the widespread success of electric vehicles will be the ability of utilities to supply ‘fuel’ on demand at a reasonable cost.”

“The introduction of electric vehicle charging stations in both parking structures at Detroit Metro Airport is the latest among a number of partnerships the Airport Authority has forged toward more sustainable transportation,” said Wayne County Airport Authority (WCAA) Board Chair Renee Axt. “As operators of the airport system at the center of the global automotive industry and the region leading the development of alternative fuel technologies, it’s our pleasure to introduce infrastructure that supports the advancements of our hometown industry.”

Added WCAA Interim CEO Genelle Allen: “With the assembly line for the Chevy Volt just 20 miles down the road, we want our customers to know that we’ll soon be ready to accommodate such alternative-powered vehicles when they’re parked at Detroit Metro Airport.”

The GM/DOE public charging station demonstration program is an addition to another DTE Energy program which offers special electric vehicle rates and up to $2,500 for the purchase and installation of a 240-volt residential charging station for faster charging. Nearly 100 DTE Energy customers have participated in the program.