A total of eight activists attempted to stop a flight scheduled to carry eight deportees to Nigeria and Ghana last night at London Stansted. 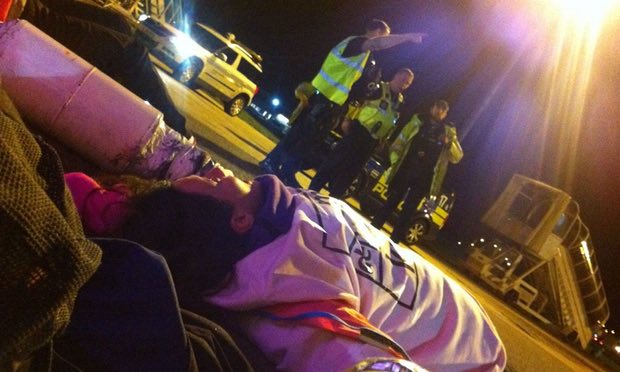 An investigation has subsequently been launched as to how the protesters gained access to the runway.

The activists blockaded the chartered jet which was due to carry failed asylum seekers from Nigeria and Ghana on behalf of the Home Office, at approximately 10pm last night from the London airport.

“We understand there is a protest around an aircraft, but we don’t have details of the plane.

“As a precaution flights have been suspended while police carry out an inspection.

“Essex Police believe they have contained all the people involved in the protest but as a precaution they are doing a double check.

“Once they have done that they will give the all clear to air traffic control.”

The protest, it is thought, was carried out by activists from campaign groups Lesbians and Gays Support the Migrants, Plane Stupid and End Deportations said the protest, broadcast live on Facebook, and in response to the “brutal practice” of mass deportations.

Susan James from Plane Stupid stated: “Mass deportations like the one we stopped are immoral, unfair and illegal.

“In the wake of the Brexit vote, this government is more keen than ever to be seen to be “tough” on immigration. But its mass deportations have devastating human consequences.

“Everything about these deportations points to the fact that they are inhuman, and must be stopped.”

One woman on the flight told sources: “My ex-husband said he knows I am being deported. He is waiting for me. He is planning to kill me.”

Another male deportee said: “I have been in this country for almost 18 years. My family and my life is here in the UK. If they take me back to Ghana I will kill myself.”

Commercial flights resumed late on Tuesday night after comprehensive checks of the compound had been conducted.