MPs back aviation deal as a priority following EU referendum

A large majority of MPs (86%) across the House of Commons agree that the UK’s international air connectivity is more important than ever before, following the UK’s decision to leave the EU. 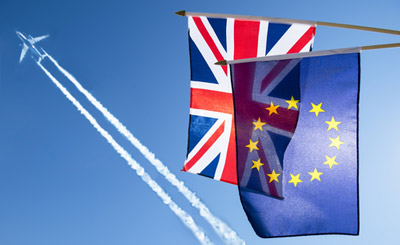 More than 80% of MPs surveyed by ComRes on behalf of the Airport Operators Association add that to ensure the continuity of air services between the UK, the EU, and other countries like the USA and Canada, agreeing new air services agreements with these countries should be one of the UK Government’s top priorities following the EU referendum.

Aviation is legally unique: it is separate from trade agreements and does not form part of the World Trade Organisation (WTO) system. Instead, countries negotiate bilateral or multilateral air services agreements to provide airlines with the legal rights to fly to certain places. These can be very restricted (e.g. one flight a week to a specific airport only) or very liberal (anytime, anywhere).

To ensure connectivity continuity, the UK will need to negotiate a new air services agreements with the EU and with countries like the US to replace the existing EU-level agreements the UK is part of. If there is no such agreement by the time the UK leaves the EU, the UK’s connectivity will be undermined and its ability to trade will be made significantly more difficult.

Aviation is legally unique: it is separate from trade agreements…

“International aviation connectivity will the foundation upon which a truly global Britain is built, with already nearly three-quarters of visitors to the UK and 40% of the UK’s trade by value travelling by air. UK airports stand ready to facilitate this future connectivity.

“The UK was the driving force behind the open and liberal approach to air connectivity within the EU and between the EU and countries like the US and Canada. This move away from the old, restrictive approach to aviation has benefited consumers and businesses alike: more destinations are served from the UK more frequently and at lower fares.

“It is important that UK families going on holiday and business people seeking out new trade opportunities can continue to enjoy the benefits we see today of an open aviation market.

“It is good to see MPs recognise this and believe, like the AOA does, that the UK Government should prioritise new aviation agreements. This will ensure that the legal framework for aviation links with the EU, the US and other countries seamlessly continues once the UK leaves the EU. We look forward to working with the Government to make the case at home and abroad for a deal that works for everyone.”