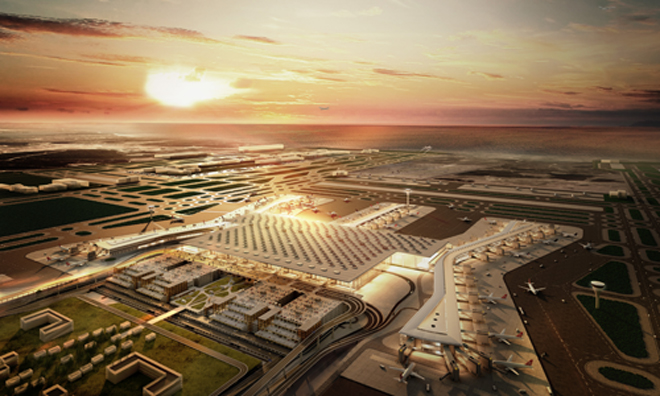 The competition was fierce, but in the end the prominent jury decided in favour of one of the biggest projects in the history of Turkey. At the World Architectural Festival in Berlin, Istanbul New Airport came first in the category “Future projects – Infrastructure.” “Recognition by the best architects in the world fills us with pride,” says Yusuf Akçayoğlu, CEO of İGA Airports Construction, the company that is constructing the airport and that will operate it for 25 years.

“From day one, we have set the highest standards and followed a clear idea in our architecture and design: that is combining a unique sense of place with functionality. The airport reflects the contemporary elements and values of Turkey. At the same time, it offers its customers an unprecedented aviation experience.”

The best international architects gathered at the World Architectural Festival, held from November 16 to 18 in Berlin. More than 300 projects from around 60 countries applied for the awards in 32 categories. Among the competitors in the category “Future Projects – Infrastructure” were Shanghai Airport Caravanserai in China, Jeju International Airport in South Korea, and the main station in Stuttgart, Germany.

Responsible for the lead design of Istanbul New Airport is Scott Brownrigg, based in the UK. Two local offices for detail design, Fonksiyon and TAM/Kiklop, support them. Only a few weeks ago, İGA celebrated receiving another award: the airport’s future air-traffic-control tower was awarded the International Architecture Award 2016 granted by the Chicago Athenaeum.

Once opened in the first quarter of 2018, Istanbul New Airport, situated just 35 kilometres from the centre of Istanbul on the European side of the city along the Black Sea coast, will serve 90 million passengers. By the time all phases have been completed, the capacity will rise to 200 million. It will be the biggest airport in the world and will strengthen Turkey’s role as an important global aviation hub.