Dr. Aliu was re-elected for a second three-year term as President of the Council of the International Civil Aviation Organization (ICAO)… 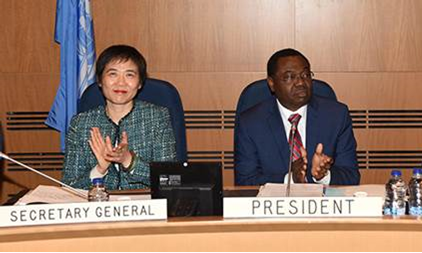 Dr. Olumuyiwa Benard Aliu was re-elected by acclamation today for a second three-year term as President of the Council of the International Civil Aviation Organization (ICAO). “Over the past three years, ICAO has been working tirelessly to promote the importance of civil aviation to socio-economic development, as well as its prioritization in national and regional investment and development planning,” Dr. Aliu noted in his acceptance remarks. “We have also made great strides in securing the assistance and capacity building our Member States need most, under the ICAO No Country Left Behind initiative, and will now look forward to its next iteration which will be more focused on aviation infrastructure development.”

“The ICAO Council has played a key leadership role in this process, and its guidance will now be needed more than ever to assure the fast-tracked development of the new ICAO Global Aviation Security Plan (GASeP) endorsed at the 39th Assembly, to make ICAO’s audit processes more efficient and effective, to ensure ICAO fully optimizes its extensive audit and other data, to refine all of our programmes and priorities, and importantly to help ICAO’s Carbon Offsetting and Reduction Scheme for International Aviation (CORSIA) become fully operational by 2020.”

“Going forward, the ongoing pursuit of the objectives and targets under ICAO’s Global Plans for Safety and Air Navigation, the GASP and the GANP, should be complemented with added guidance to States on the operational, regulatory, training and capacity building requirements in support of the ICAO Aviation system Block Upgrades (ASBUs), both nationally and regionally,” he added.

Council President Aliu also stressed that he would use his renewed mandate to drive further progress on the regulatory requirements for cybersecurity preparedness, Remotely Piloted Aircraft Systems (RPAS) and commercial space flights, and the development and operationalization of an Emergency Response Policy for ICAO, amongst a wide-range of further objectives for ICAO and 21st century air transport.

One response to “Dr. Olumuyiwa Benard Aliu re-elected as President of ICAO Council”