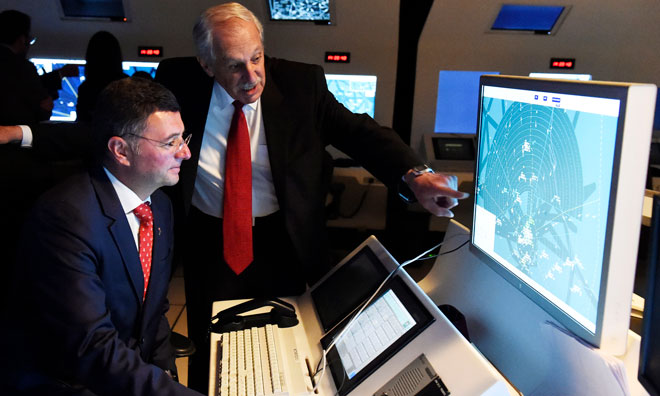 Frequentis has been a reliable partner of the Mexican air traffic control system SENEAM for more than 20 years — during this time all airports in Mexico have been equipped with Frequentis solutions. In a recent visit to the air traffic control centre in Mexico City, Jörg Leichtfried — the Minister for Transport, Innovation, and Technology — was impressed by the efficiency and innovative strength of the systems.

Mexico has a nationwide network of modern airports; its airport infrastructure being regarded as the most advanced in Latin America. The Mexican air navigation service provider, SENEAM, is responsible for air traffic control across all of Mexico, with about two million air movements being handled annually.

Due to its strategic geographic position, Mexico plays an important role in the air traffic within the Americas. The most innovative air traffic management solutions provided by Frequentis are also going to be employed for the construction of the new airport in Mexico City — it will have six runways and a capacity of 120 million passengers annually.

Austrian technology in service all around the world

During a visit to the Area Control Centre (ACC) in Mexico City, a high-ranking Austrian delegation, led by Federal Minister Jörg Leichtfried, were impressed by the efficiency of the Frequentis solution. All overflights in the airspace of Mexico City, as well as all landings and take-offs at the Mexico City Airport, are controlled at the ACC Mexico City.

The Minister for Technology Leichtfried was impressed: “Frequentis is a showpiece for the successful export of technology from Austria. For over 20 years, the company has been providing reliable communication between cockpits and the tower at the airports in Mexico so that airplanes can safely take off and land. We support Frequentis in further expanding its market leadership in this country and, for example, in making the new airport in Mexico City safer with Austrian technology.’

In addition to communication systems, Frequentis has also supplied information systems to SENEAM. These systems are for the purpose of increasing the efficiency and safety in air traffic control towers. Installation of the latest VCS infrastructure is currently being completed at the ACC Mexico City. As part of this, the 1000th Frequentis air traffic controller working position will be installed in Mexico.

The entire voice communication with airplanes and other ground stations operates via a controller working position which is essentially a touchscreen from which the air traffic controller is able to access all radio stations and telephone connections. This communication infrastructure is highly failure resistant and has an uptime of at least 99.999%. Frequentis is the world market leader for such systems.