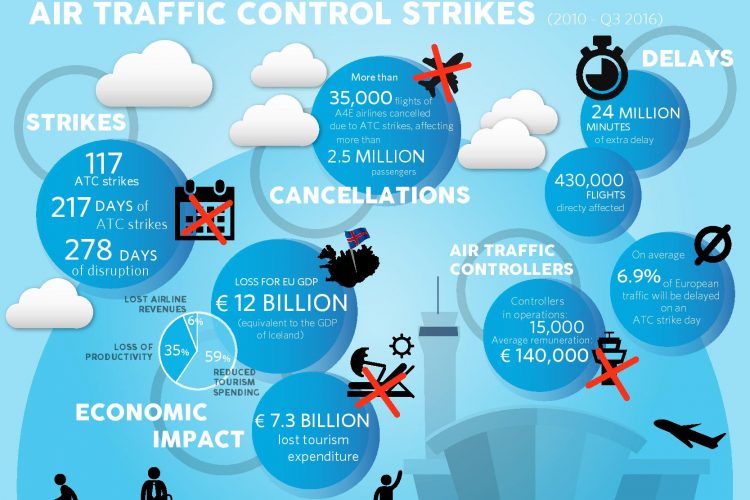 A4E has released an updated version of a PwC study on the economic impact of Air Traffic Control (ATC) strikes in Europe. Now including the 2016 figures, the analysis reveals that since 2010 the overall impact of ATC strikes have cost €12 billion to the EU economy, associated with more than 140,000 jobs. Since 2010, there have been 217 ATC strike days in the EU – equivalent to almost one month of strikes every year. In total, there have been 278 disrupted days until 30 September this year accounting the days before and after an ATC strike as flights had to be cancelled proactively in advance and accumulated delays spilt over to the next day.

Across the EU, ATC strikes occur most frequently in France, followed by Greece, Italy and Portugal and resulted in 35,000 cancellations and more than 7 million minutes of delay among A4E airlines. Europe’s tourism industry is the first victim of air traffic controllers’ strikes, with damages amounting to around €7.3 billion. Interestingly, some countries in which ATC strikes have occurred rely significantly on travel and tourism.

“These figures are shocking. Since 2010, 2.5 million passengers have seen their travel plans spoiled by the disproportionate industrial action undertaken by a group of 15,000 air traffic controllers. 2016 will be a record year for airlines – unfortunately, just in terms of ATC strikes. There have been 22 separate strikes  in Europe, encompassing 41 days of strike, and 55 days of disruption.

“If Europe wants to create jobs and be competitive it should take action to ensure its reputation is not damaged, jobs are not affected and the daily life of Europeans is not impacted by this repeated action”, said Thomas Reynaert, Managing Director of A4E.

This week European holiday makers witnessed a new phenomenon when a strike was again called off at last minute. Thousands of passengers still saw their travel plans disrupted when airlines had to cancel more than 100 flights to and from Greece even though the planned 4-day strike was called off at the very last minute, as the notice provided did not allow the airlines to reinstate all cancelled flights.

“Airlines need to be able to plan ahead to reduce the impact on passengers. They did their utmost to reinstate flights but the damage was done and cancellations could not be avoided anymore. It is unacceptable that air traffic controllers are infringing people’s rights again and again”, added Thomas Reynaert.

“A4E has repeatedly called on European authorities to take immediate action to protect the rights of European travellers.

We are launching “Keep Europe’s Skies open” – a petition where consumers can unite and let out their frustration about the continuous travel disruptions. A4E members will promote this petition via their social media and passenger information channels. We intend to present this petition in Brussels to urge the EU Commission and the EU Parliament to finally take action. The reputation of Europe is under threat”, concluded Reynaert.