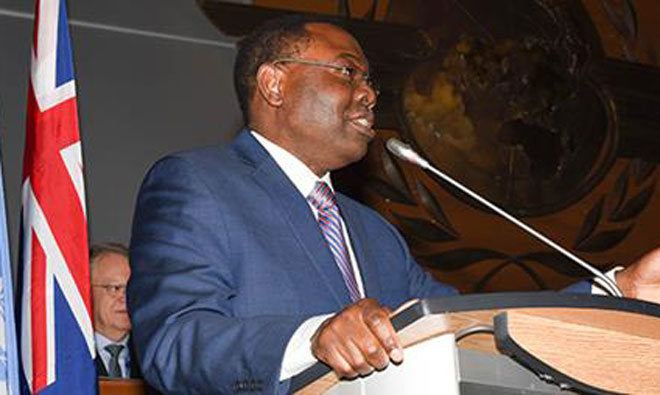 Dr. Warren was recognised by the ICAO Council and the international civil aviation community for the outstanding contributions to aviation safety – made possible by his invention and refinement of the first-ever aircraft flight recorder, or black box.

The award ceremony took place on the opening day of ICAO’s 39th triennial Assembly, with hundreds of international dignitaries on hand to see President Aliu present the award to three of Dr. Warren’s children.

“Flight recorders are one of our most relied upon resources for the improvement of aviation safety,” President Aliu highlighted.

“And I wish to acknowledge here the tremendous debt of gratitude owed to Dr. Warren’s vision, commitment and tenacity, and for his far reaching contributions to international civil aviation.”

In 1953, Dr. Warren was a jet-fuel expert recruited to a special team assembled to analyse the mysterious mid-air explosions being experienced by the world’s first commercial jet aircraft, the de Havilland Comet. In the course of this work he realised how valuable it would be for post-accident safety analysis if a recording were available of what had transpired on the aircraft prior to their accidents.

Having recently observed one of the world’s first miniature recorders being demonstrated at a trade fair, he began to imagine how such a device could be adapted for use in modern commercial aircraft, eventually developing a first demonstration unit.

“While today we all understand and appreciate the safety benefits of Dr. Warren’s inspiration, like many innovations his was first met with scepticism. But consistent with his passion for innovation, and his commitment to help prevent accidents and save lives, Dr. Warren persevered with his idea to the benefit of air transport and its now billions of yearly passengers,” Dr. Aliu stressed.

As his innovation became widely adopted in the ensuing decades, Dr. Warren went on to enjoy an illustrious scientific career characterised by much recognition and honorariums. Notable among these was his appointment as Officer in the General Division of the Order of Australia in 2002, and the Royal Aeronautical Society’s awarding him the Lawrence Hargrave Award in 2001.