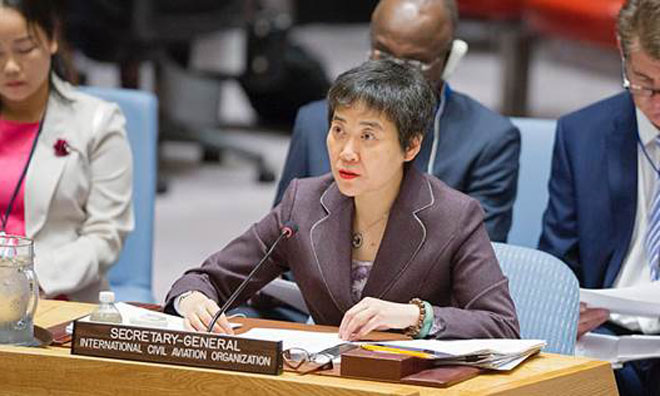 “The high-profile landside airport attacks in Brussels and Istanbul earlier this year were a tragic reminder of the enormous challenges faced in securing public areas, the inseparability of aviation security and national security, and of the economic and social consequences of terrorism,” remarked Dr. Fang Liu, ICAO’s Secretary General, who characterised the security situation as both promising and challenging.

Improvised explosive devices concealed in baggage and cargo, MANPADS, drones, cyber security, and insider threats were among the current priority security challenges, Dr. Liu noted in her briefing. She also commented that these can be mitigated through the effective implementation of ICAO’s Security Standards, and that this requires complex coordination with national and multilateral bodies. “The required coordination can be complex and challenging at times”, she pointed out, mainly due to variation among State coordination mechanisms, and that greater coordination among domestic national agencies is needed.

“An important aspect of our work involves mobilising political will for the improvement of national capacities,” Dr. Liu said.

“The Security Council’s focus will serve to heighten the efforts by the global community on aviation security, encourage intensified political engagement by the States to effectively implement ICAO’s Security Standards and to support ICAO’s technical assistance activities to the States in need.”

As a major component of the ICAO “No Country Left Behind” (NCLB) initiative, ICAO is putting tremendous effort into technical assistance efforts aimed at helping States meet the challenges of effective threat prevention and risk mitigation, but greater commitments and contributions are needed to fully address current gaps in the international framework.

To help coordinate this work more effectively at the global level, ICAO will be asking its 191 States to endorse the development of the first-ever Global Aviation Security Plan at the agency’s 39th Assembly which begins next week.

“Under ICAO’s new Global Aviation Security Plan, States, regions, industry and other stakeholders will be unified through a strategic framework that offers clarity on priorities for aviation security enhancement,” Dr. Liu remarked, noting that it will provide ICAO with invaluable support in achieving its aviation security objectives, and in effectively contributing to the UN Security Council resolutions as well as the UN Global Counter-terrorism Strategy.

The ICAO Secretary General made a briefing to the UN Security Council upon the invitation of its President. On that same day, the Security Council unanimously adopted Res 2309 on countering terrorist threats to civil aviation.

During that ministerial session chaired by Mr. Murray McCully, Minister for Foreign Affairs of New Zealand, the speakers, including Mr Boris Johnson, Secretary of State for Foreign and Commonwealth Affairs of the United Kingdom; Mr Jeh Johnson, Secretary of Homeland Security of the United States commended the work of ICAO and called for all States to work within ICAO to ensure that its Security Standards are continuously reviewed and adapted to address the terrorist threats: the resolution also calls upon States to support ICAO to continue to enhance audit, capacity development and training programs.