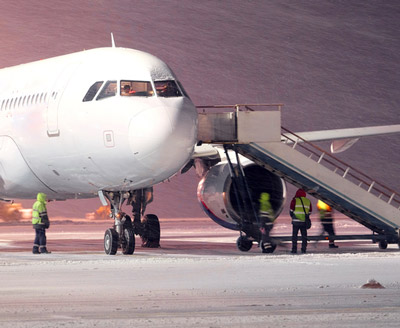 The FAA developed the standards based on the work of the Takeoff and Landing Performance Assessment (TALPA) Aviation Rulemaking Committee (ARC), which was formed after the December 2005 overrun accident at Chicago Midway Airport.  In that accident, Southwest Flight 1248 ran off the end of the runway and into a city street after landing during a snowstorm.

As a result of the committee’s work, the FAA has developed a new method for airports and air traffic controllers to communicate actual runway conditions to the pilots in terms that directly relate to the way a particular aircraft is expected to perform. TALPA improves the way the aviation community assesses runway conditions, based on contaminant type and depth, which provides an aircraft operator with the effective information to anticipate airplane braking performance.

The pilot or dispatcher would then consult the aircraft manufacturer data to determine what kind of stopping performance to expect from the specific airplane they are operating.

The airport operator will assess surfaces, report contaminants present, and determine the numerical Runway Condition Codes (RwyCC) based on the RCAM. The RwyCCs may vary for each third of the runway if different contaminants are present. However, the same RwyCC may be applied when a uniform coverage of contaminants exists. RwyCCs will replace Mu numbers, which will no longer be published in the FAA’s Notice to Airman (NOTAM) system.

Pilot braking action reports will continue to be used to assess braking performance. Beginning on 01 October, the terminology “Fair” will be replaced by “Medium.” It will no longer be acceptable for an airport to report a NIL braking action condition. NIL conditions on any surface require the closure of that surface. These surfaces will not be opened until the airport operator is satisfied that the NIL braking condition no longer exists.

Further information on the Takeoff and Landing Performance Assessment can be found here.