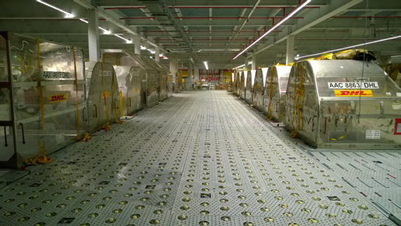 With this edition of our Newsletter we would like to update you on our activities and events around the globe. Please feel free to contact us should you require any further information or support. Following a period of detailed consultancy and pre-engineering, SACO signed a contract in June 2015 for the supply and installation of the first fully automated ETV system in the South Pacific. The system includes a 4 level 15ft ETV designed and built by SACO with a storage rack for 300 ULD positions, lowering build/break stations, dolly docks and truck docks. The FOX cargo IT system enables full remote and automated control of the handling/storage equipment through Profibus links with the various PLC’s and SCADA visualisation. The cargo IT system is interfaced with the client’s IT system for data transfer of ULD information to enable advance planning, on-line control and monitoring of their inventory, breakdown and transfer operations. SACO was commissioned to supply all ULD handling equipment including a total of 10,500 m2 castor deck and 240 reload/offload roller decks with weighing equipment. The scope also includes PLC and SCADA systems to monitor the ULD loading and unloading operations. The first phase was installed and commissioned in Autumn 2014, a second phase in Summer 2015, and the remainder is planned for completion before Winter 2015. In March 2015, DB Schenker Logistics UK opened their new perishables handling facility at London Heathrow with numerous features that improve handling processes, adding efficiency and value to their perishables customers supply chain. To avoid manual handling of air freight, the temperature controlled facility includes a 20ft truck dock from SACO installed in an airlock, as well as a SACO slave pallet system with two Pallet Masters and slave pallets. The Pallet Masters each include a unique integrated weighing system for weighing ULD’s whilst sti ll on the slave pallet. “Efficiency is of paramount importance for perishables customers”, says Helgi Ingolfsson, CEO of DB Schenker Logistics in the UK. “The significant investment we have made is not only part of our airfreight strategy, but a result of from feedback from clients and valuing their needs from a logistics provider in this sector.”

The purpose designed secured facilities for handling and storage of high value goods includes a multi -purpose ULD lift from SACO. The dedicated equipment with double hydraulic scissor lift and right-angle transfer decks enables lifting of air cargo ULD’s from apron level to the raised warehouse floor, whereas it also functions as a lowering build/break workstation as well as transfer station to storage decks and offload to roller tracks for ULD’s loaded with valuable vintage cars and Formula-1 racers.

TNT increases its operations in Liège

In 2014 TNT Express Euro HUB initiated a major project (Liège ExtraFit – LEF) to upgrade and expand its parcel handling and sorting facilities at Liège Airport, Belgium. As part of this project, SACO was awarded a contract in November 2014 for the supply and installation and relocation of the ULD handling equipment. During the first 6 months of 2015 a total of 3,500 m2 castor deck and 140 reload/offload roller decks with weighing systems were installed and commissioned. The supply also included various scissor lift s for lowering workstations, slides for the sorting equipment, crash barriers and walkways.

Air cargo ULD handling projects were also installed and commissioned in 2014 / 2015 for: