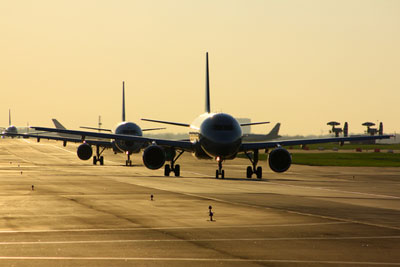 A new airport ground movement system has been developed by the University of Lincoln to provide quick and fuel efficient routes for moving aircraft on the ground. With annual rises in air traffic and airports operating at near or full capacity, a new system has been developed which could, according to research, transform the way our airports operate. Industry experts now recognise the need to improve airport infrastructure ensuring efficient movement of aircraft on the ground. This will not only increase capacity but save time, cut costs and reduce carbon emissions.

Research carried out at the University of Lincoln addressed capacity and environmental  concerns by developing a system which generates the most efficient routes and optimal speed instructions – or speed profiles – for pilots to follow during ‘taxiing’.

The new system, built on a database of pre-computed routes, would be much faster than the current approach. Unlike the existing system, which is technically complex and demanding on computing power, it could also be used in real-time, reacting to sudden changes on the runway.

The proposed database stores ‘building blocks’ from which any route on the airport taxi-way can be recreated. Each building block represents a small section of airport ground, for which the optimal speed instructions have already been calculated. A new algorithm can quickly combine these building blocks to produce the most suitable route for guiding aircraft from one location to another.

Dr Michal Weiszer, Research Fellow in the School of Engineering at the University of Lincoln, explains: “The ultimate aim of our research is to produce a more realistic, cost effective and greener ground movement. It is only very recently that studies have begun to take into account the issue of speed profile optimisation so that not only time efficiency but also fuel savings and a decrease in airport emissions can be achieved at the same time.

“The current approach to generating speed profiles is computationally demanding and cannot be used in real time, so in order to improve this system we are proposing a database of pre-computed solutions. Using this database in conjunction with our suggested algorithm would also avoid duplication of taxiway segments during planning, as it respects the routes and schedules of other aircraft while preventing conflicts between them. This would be another major benefit for airport stakeholders.

“Our experimental results are based on existing data from Zürich airport, which is one of Europe’s major air traffic hubs, and they show that our proposed approach would be very effective in speeding up the route-making process.”

Dr Weiszer believes the proposed database and algorithm would make this model fully functional for existing airport management systems and could pave the way for even more powerful and realistic models in the future.