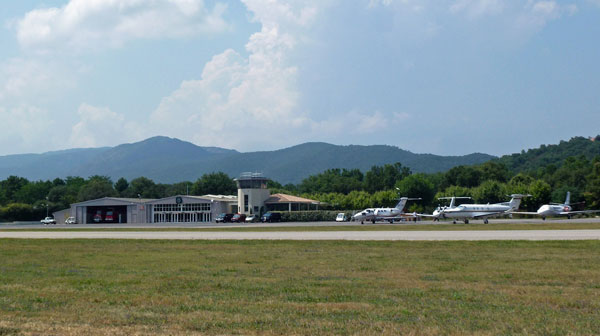 Aéroports de la Côte d’Azur (ACA) announced today it has acquired 99.9% of shares of AGST (Saint-Tropez Airport), previously owned by the Reybier group for the past 15 years. ACA ranks second in French commercial traffic after Aéroports de Paris (Roissy-Charles de Gaulle and Paris-Orly) with 11.2 million passengers in 2012, and is the second French airport for Business Aviation traffic after Paris-Le Bourget with over 42,500 movements in 2012. AGST (Aéroport du Golfe de Saint-Tropez) operates Saint-Tropez Airport. It has made about 6,900 business aviation movements in 2012, bringing the total number of ACA business operations to 49,000 movements (2012 pro-forma including Nice, Cannes-Mandelieu, and Saint-Tropez).

In the past few years, the Reybier group has supported AGST, enabling it to optimise the management of the airport and improve its services. With its experienced team and renovated facilities, AGST prides itself on customer service and the management of passengers’ transfers.

AGST has become a major national and international influence, placing Saint-Tropez as a luxurious tourism destination and actively contributing to the economic development of the region.

A December 2012 research showed that the economic impact of the airport has been estimated at 170 million euros.

Michel Reybier explained, “In the constant concern of customer service, the merge of AGST with ACA seemed particularly relevant, especially because they both strive to provide outstanding service. I am certain that the region will receive a diversified and quality service that will enhance the activity of the area, always within airport, social and environmental regulations.”

Dominique Thillaud, CEO of ACA, stated, “This operation is part of the development strategy of ACA, which includes improving the service capacity available for General Aviation on the French and Italian Riviera, while providing a consistent supply in geographic terms. Saint-Tropez is a new luxury destination in our cluster enabling us to offer our customers quality services and standards on all of our platforms.” Thillaud also added, “ACA aims to expand its environmental politics, in the same way we did with Nice and Cannes, to the neighborhoods surrounding the Saint-Tropez Airport.”

Pierre Fourques, director of AGST, added, “It is important to highlight the benefit of partnering with a major regional player for Saint-Tropez Airport. ACA’s ambition is to build on the work done in recent years by the airport’s teams, in order to keep up the current structure and teams.”

Michel Tohane, director of the General Aviation Business Unit for ACA, stated that “AGST has a recognised expertise in business aviation, including assistance during lay overs, with the highest quality of services provided to various clients at the airport, from crew members to passengers. Various collaborations in the field of aeronautical services and sustainable development can now be considered, keeping the customer at the heart of our focus.”