Dubai International, the fastest growing airport in 2012 according to OAG statistics and the second busiest airport for international passenger traffic according to Airports Council International data, can now claim the title as the world’s leading hub for A380 operations according to published airline industry flight schedule data for 2012. 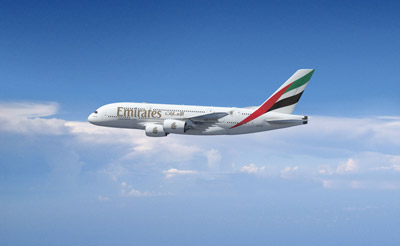 “The opening of Concourse A earlier this year was a US$ 3 billion validation of our intention to be the world’s premiere A380 hub,” said Paul Griffiths, CEO of Dubai Airports. “This new facility is purpose built for the aircraft with two-tiered gates facilitating boarding directly from the first and business class lounges.”

Fleet size and network structure had a direct bearing on the carrier contributions to A380 scheduled operations in international hub airports. Although home carriers Lufthansa, Qantas, Singapore Airlines, Air France/KLM and Emirates operate the lion’s share of super jumbo scheduled flights in their home markets, that was not the case for London Heathrow (Qantas), Hong Kong (Emirates), New York JFK and Los Angeles (Singapore Airlines).

“Based on Emirates’ order book, the new Qantas A380 operation and our $7.8 billion expansion plan, Dubai International is well placed to continue to hold the top position for A380 operations in 2013 and beyond,” added Griffiths.