LED technology has fast become a proven and reliable replacement for interior, landside and airfield lighting. As Adelaide Airport’s Stephanie Bolt, Environment Manager, and Jimmy Low, Projects and Engineering Manager explain, LED technology has become a preferred option at Adelaide Airport for select lighting upgrades, not only as a way of achieving carbon reduction targets, but to enhance aviation safety and operational efficiency outcomes… 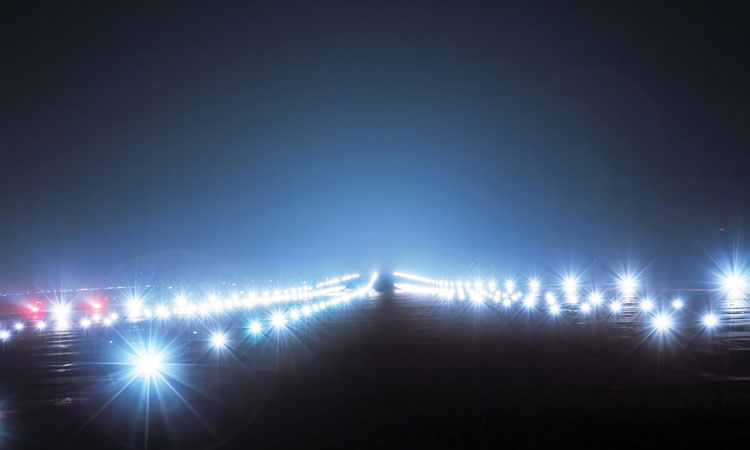 In May 2015, Adelaide Airport became the first airport in Australia to be recognised by the global Airport Carbon Accreditation programme for optimising its management and reduction of carbon emissions. Adelaide Airport Ltd (AAL) is now certified as Airport Carbon Accredited at Level 3 (‘Optimisation’), for its work in reducing its carbon footprint whilst also working to guide and influence stakeholders to do the same. We are just the seventh airport in the Asia-Pacific region to reach this level. Adelaide Airport serves as the gateway to the state of South Australia. It caters for close to eight million domestic and international passengers a year. Destinations include all other Australian mainland capital cities, as well as New Zealand, South East Asia and the Middle East.

As with any major airport, it is a significant economic driver for South Australia, contributing an estimated socio-economic benefit of approximately $AUD1.9 billion annually – or roughly 2% of the Gross State Product. As part of its key corporate responsibility, AAL pays particular attention to its environmental impact and our Strategic Plan recognises sustainability as a key philosophy that underpins our future. AAL sets carbon and energy reduction objectives and goals in each five-year Airport Environment Strategy – a document developed in accordance with requirements set within the Australian Government’s Airports Act 1996 and aligned with AAL’s Sustainability Policy and Low Carbon Statement.

Virtually all of Adelaide Airport’s emissions are from electricity consumption (85%). The technical potential to reduce the footprint therefore means reducing the quantity of energy used, or reducing the emissions intensity of the energy we consume.

Over the past five years, we have reduced per passenger electricity consumption in the terminal by 10%, and overall per passenger greenhouse gas emissions by 17%.

In 2015, our goals are to further reduce AAL’s per passenger electricity consumption by another 10% and commensurate greenhouse gas emissions by 2019, with our transition to LED lighting continuing to be a focal point in that journey.

High Pressure Sodium (HPS) luminaires have traditionally been used for flood-lighting of aircraft aprons at Adelaide Airport. Recent apron expansion projects at Terminal 1 have continued to utilise HPS fittings due to their long proven performance, however, LED fittings have been installed for the first time at the new state-of-the art Royal Flying Doctor Service (RFDS) aeromedical facility, currently under construction on the western boundary of the airport.

The RFDS facility is scheduled to commence operations in mid-2016 and incorporates a maintenance hangar, office space and direct airside connectivity for ambulance vehicles to access the fleet of medical aircraft to be parked on 15,000m2 of newly constructed apron.

The new parking apron is configured to host up to nine RFDS aircraft and will be flood-lit to a minimum 10 lux of horizontal illumination, based on RFDS’ own safety requirements.

During the design phase, AAL investigated both twin 400 watt HPS lamps and F32 LED (rated at 444 watts) luminaries to provide the required light over the new apron. Lighting analysis revealed that 14 HPS floodlight luminaries would be required across five 25m-high poles to achieve the stipulated lux requirements. In comparison, only 12 LED flood-light luminaries were required over the same number and height of poles.

HPS lamps are typically rated for 16,000 hours whilst LEDs are rated for 50,000 hours, making them approximately three times as durable. This not only significantly reduces maintenance costs by having to replace lamps less often, but also contributed to the decision to install static poles in lieu of powerlift poles used elsewhere on the airfield.

Powerlift poles allow for lamps to be replaced at ground level without the requirement for mobilising and using cranes to access the top of the poles, which add to the maintenance expense whilst constraining aviation operations. However, the risk profile attached to LED apron lamps shifted in favour of static poles due to their longer life.

The LED fittings cost approximately twice that of the HPS fittings and consume approximately 50% less electricity. However, the financial business case was largely achieved on the basis of reduced maintenance costs combined with electricity savings and $AUD100,000 capital expenditure savings to install static poles.

Performance of the new lamps will be reviewed once in operation, with a view to further investigating the use of LED technology at other aircraft parking aprons in the future.

Adelaide Airport operates a two-runway system comprised of the main runway (RWY 05/23) which is 3,100m-long and 45m-wide, and a secondary cross-runway (RWY 12/30) which is 1,652m-long and also 45m-wide. The runways are supported by several kilometres of taxiway, providing for the efficient movement of aircraft.

In the summer of 2010/2011, Adelaide Airport undertook a major resurfacing project involving the placement of more than 50,000 tonnes of asphalt covering both runways and the majority of taxiways.

During the resurfacing project design phase, Adelaide Airport undertook a detailed investigation of all airfield lighting, with the exclusion of runway edge lights and approach lights.

The spacing of taxiway centre line lights, taxiway holding positions and runway exit lighting was reviewed and designed to be compliant with CASA’s Manual of Standards Part 139. As a result, 624 new inset taxiway lights were to be procured and installed as part of the project.

A number of lighting manufacturers available in Australia were identified and assessed to replace the old fittings. Each type was assessed according to a number of criteria, including component delivery times, CASA compliance (including colour intensity and directional light output), estimated lifespan, component availability, proven performance, construction and make-up, and cost (including secondary items such as transformers and cabling).

The financial business case was developed with consideration given to initial capital expenditure, ongoing maintenance and electricity consumption. A 10-year period was applied in this case, as it is approximately the period of time at which the runways and taxiway network will require resurfacing and consideration given to the re-use or replacement of light fittings.

The lifecycle cost of Thorn Safegate SafeLED fittings was calculated to be 65% of both halogen options.

A review by Adelaide Airport of ongoing performance has verified the cost savings and validated the decision to transition to LED taxiway centre line lights. In addition to electricity savings, maintenance hours assigned to globe replacement has reduced significantly.

As part of the next major taxiway resurfacing project planned for areas not resurfaced in 2011, all remaining incandescent taxiway lights will be replaced with LED.

Adelaide Airport is continuing to roll-out a programme to progressively transition to LED for other airfield, terminal and general flood-lighting requirements.

Short-term plans are currently in place to replace lighting along the pedestrian pathway between the long-term car park and Terminal 1, within the Memorial Building (housing the historic Vickers Vimy aircraft), and selected street lighting with LED.

However, it is important to note that LED replacement constitutes one part of a wider lighting efficiency programme that includes the terminal and occupied office spaces located in other buildings.

Taking a broad approach to lighting efficiency has meant that Adelaide Airport has realised savings across all facets of lighting, not only in the use of LED. There is no ‘one size that fits all’.

However, where there is a practical opportunity and lifecycle cost advantage to transition to LED, there are many positive outcomes to be gained.

Stephanie Bolt has been the Environment Manger at Adelaide Airport Limited since 2005, responsible for overseeing the company’s sustainability, environmental compliance and wildlife management programmes. Prior to this, Stephanie was a Senior Environment Advisor at the Zinifex (now Nyrstar) Smelter in Port Pire and spent many years in various environment and natural resource management consulting roles in Australia and Singapore.

Jimmy Low is the Projects and Engineering Manager at Adelaide Airport Limited. Jimmy has a bachelor degree in Civil Engineering and Master’s degree in pavement engineering.