28th March 2001 marked the onset of a new era for air transport in Greece, with the opening of the Athens International Airport ‘Eleftherios Venizelos’, which has contributed to the transformation of the capital as one of the most modern, functional and safest airports in the world. 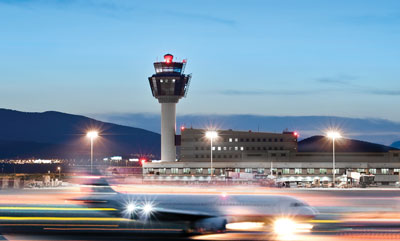 Athens International Airport S.A. (AIA) was established in 1996 as a public-private partnership with a 30-year Build – Own – Operate – Transfer (BOOT) concession to build and operate the airport. In doing so it has successfully undertaken a series of very important roles, i.e. as manager of the airport, employer and responsible corporate citizen. AIA is a privately managed company, with the Greek state holding 55% of shares and private shareholders collectively holding 45%.

Thanks to its favourable geographical location at the crossroads of three continents, its state of the art infrastructure and top-notch service, AIA has earned the trust of passengers, as well as numerous international distinctions and awards. Today, it constitutes one of the major gateways to Southeastern Europe and forms a unique entrepreneurial entity of economic and social development in the Attica basin. Over 13,000 people are employed as part of the airport community which consists of more than 300 companies closely connected to AIA and contributes to its smooth operation. Meanwhile, the Athens Airport City is one of the biggest employment engines in Greece, contributing 2.63% GDP to the national and local economy, as demonstrated in a 2013 study by the Athens University of Economics and Business.

During its 13 years of successful operation the airport has served more than 187 million passengers through 2.4 million flights. AIA, however, is far more than just a gateway to Southeastern Europe. Aiming at continuous growth, AIA develops its extensive real estate assets, conducts large scale commercial activities and exports the company’s pioneering know-how in the IT sector. Indeed, approximately 40% of the company’s turnover and a significant share of its profits come from non-aeronautical activities.

The deployment of the AIA Marketing strategy (ABCD model) is focused on four interrelated entities which are: the Airlines, the Business partners, the Customers and the Destination. The airport, through this strategy, either initiates and supports actions that drive to the completion of the targets set per entity or takes the lead and orchestrates actions that put the four entities in cooperative mode for the accomplishment of a common goal. An illustrative example of the latter is the ‘athenspotlighted’ (ASP) programme which is offered to its foreign passengers through the free ‘athenspotlighted’ city card.

The Athens city card gives the opportunity for foreign visitors to Athens to discover the unique character, history and cosmopolitan atmosphere of the city through deals, special offers and promotional rates at a range of more than 110 enterprises in downtown Athens. The ASP programme is an initiative of AIA placed under the auspices of the GNTO (Greek National Tourism Organisation) and supported by 13 airlines that promote the programme as ambassadors. The ‘athenspotlighted’ free city card can be used at various cultural sites, museums, art galleries, restaurants, nightclubs and a wide variety of selected stores all over Athens.

Distinguished as one of the best airports in the world, AIA offers a wide range of services and facilities, making each moment at the airport a pleasant experience for travellers, their meeters and greeters and the airport’s visitors. AIA, consistent with its customer-centric philosophy and always keen to further improve its services, launched an easy to use application in 2014 named ‘a vote for a smile’. The application is hosted on tablets placed at the terminal’s food and beverage (F&B) units, giving the opportunity to the passengers and visitors to evaluate the service they received. The customers’ votes are processed in order to rank the service offered by each F&B unit and award the employees of the unit with the highest evaluation score as well as the employees of the unit that demonstrated the best improvement.

This year, towards the same direction and in order to maintain the high level of service excellence and further enhance the airport experience, AIA introduced the innovative ‘i-mind’ corporate programme, which calls airport company employees to record the ‘airport experience’, acting as potential passengers. Looking through the eyes of the thousands of passengers and airport visitors passing through the airport, AIA employees monitor and comment on all services and facilities, with the purpose of improving or even renewing the airport experience. Every day, ‘i-minders’ from all job grades and positions, even those of non-operational specialisation, are evaluating the main terminal building’s services and recording their remarks on special tablets.

Athens International Airport maintains one of the best airport terminals in Europe, equipped with state of the art systems, featuring user friendly orientation and comfortable waiting areas. Furthermore, according to surveys conducted at the airport, our passengers and visitors highly appreciate the airport’s ambience, the courtesy of staff and the fine and exquisite offers of over 120 quality shops, restaurants & cafés in its Airport Shopping Centre as well as the attractive and highly convenient retail park which is located within the airport compound .