The Tampa Bay region has a legacy of aviation firsts that dates back to 1914 when Tony Jannus piloted the world’s first commercially scheduled flight, flying from St Petersburg to Tampa. As Joe Lopano, Chief Executive Officer of Tampa International Airport describes, it is continuing this tradition through an extensive expansion programme. 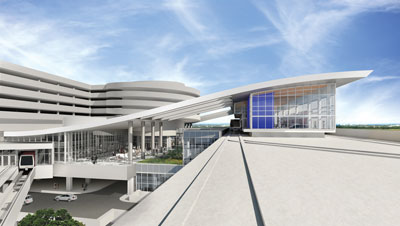 In 1971, Tampa International Airport made history by introducing the revolutionary hub and spoke design including the very first airport people mover, which has become the model for the rest of the world. Now we are building on our remarkable legacy, with a $943 million expansion based on the results of a 2012 Master Plan Update that remains true to our principles of putting passengers first.

The five principles that will guide all of the airport’s development and growth in the coming decades are:

Our Master Plan Update encompasses all of these principles. The first phase calls for a new rental car centre connected to the main terminal by an automated people mover and an expanded main terminal with outdoor dining terraces and a new concessions program.

Two future phases outlined in the Master Plan Update build on the flexibility of the original structure’s ground-breaking design, calling for a new international airside extending from the existing main terminal and expansion of airsides as passenger demand dictates. Ultimately, the Master Plan Update provides a blueprint for growth that will allow us to increase our capacity to 34.7 million passengers each year, a milestone we anticipate hitting in the next 20 years, while preserving land on the airport’s 3,300 acre campus for future generations.

The 2012 Master Plan Update concluded that our curbsides and rental car facilities, currently occupying space in our long-term parking garage, are at capacity and our main terminal is nearing capacity. To allow for continued growth, our first phase projects move the rental operations away from the main terminal to property near the airport’s entrance. This allows rental car companies to continue to grow and allows us to reclaim 2,400 parking spaces. It also decongests the terminal area by removing 2.7 million cars a year from our curbsides and roads.

The main terminal expansion is occurring over decks built more than 40 years ago with just such an expansion in mind, once again underscoring the vision demonstrated by this airport’s founders. The outdoor dining terraces and lounge areas make the most of Florida’s sunshine and spectacular weather.

The expansion adds about 55,000ft2 – roughly the equivalent of a football field – to the main terminal. It includes lounge areas that reflect the terminal’s reputation as ‘Tampa’s living room’, and distinct spaces for business travellers and families, green zones with plenty of plants, and art installations. The inside of the terminal will become more open and spacious, resulting in improved sightlines and better wayfinding for passengers.

We are also improving the customer experience in other ways, such as putting shops and restaurants where travellers want them – after security check points. Similar to the philosophy that drove the airport’s design 40 years ago, the expansion makes sure passengers never have to walk more than 700 feet to get to their final destination.

We have taken a careful and very deliberate approach not only to improve the functionality but also aesthetics of our facility. The region’s natural environment has been the inspiration for almost every visual aspect of the facility’s exterior and interior. The design plays off the soft colour of the sand, the refreshing blues of the bay, and the beauty of the sunrises and sunsets. When passengers visit the airport, we want them to recall in our design all of what makes the Tampa Bay region so unique and special.

The first phase of the Master Plan Update is scheduled for completion in 2017 and will be followed by a second and third phase. The second phase positions the airport for future expansion of the Main Terminal, relocating the air traffic control tower and demolishing and relocating the hotel, which currently connects to the north side of the terminal. The third and final phase of the Master Plan Update will expand the terminal to a final capacity of 34.7 million annual passengers, expanding the terminal to the north in the space formerly occupied by the hotel and creating a new airside.

Our growth has enormous implications for both the airport and the community. The first phase of construction alone will create or save roughly 9,000 construction related jobs and is forecast to have a $370 million economic impact on the region. Ultimately, we expect these first phase projects to bring more than 1,100 permanent jobs to our community and increase visitor spending by $640 million over 20 years.

A lot can happen in the next two decades. While the first phase of our expansion meets our immediate needs, the flexible approach to development outlined in our 2012 Master Plan Update and made possible by the footprint of the current main terminal means we can build as needed to accommodate our passengers. We’re confident that our new expansion will create a facility that will be used and loved by passengers and visitors for decades to come, just as our existing facility has served our passengers so well in previous decades.

Joe Lopano, Chief Executive Officer of Tampa International Airport, arrived in Tampa in January 2011. He previously worked at Dallas/Fort Worth International for 14 years as its Executive Vice President for Marketing and Terminal Management. Overall, he has more than 22 years of airline and airport expertise.