In a bid to join the exclusive circle of five-star airports, Munich has undergone an impressive development programme. CEO Dr Michael Kerkloh reveals why the airport is ranked number one in Europe. 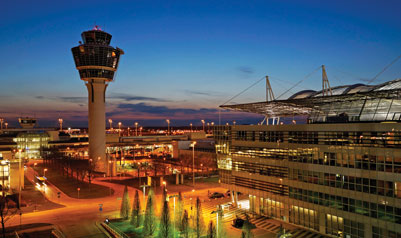 Munich Airport stayed on course for growth in the first half of 2014 and set yet another record for passenger traffic; counting a total of 18.7 million passengers – a new all-time high for the first half of a calendar year. This represents yet another one per cent increase in passenger traffic over the same period a year earlier. The airport also expects to report a new passenger record for the entire year that will probably come close to the 40 million mark.

New intercontinental routes launched during the current summer season were a major factor behind the new record. For example, Lufthansa began offering five weekly non-stop flights to Mexico City at the beginning of April 2014 and in June 2014 launched a daily flight to Toronto. United Airlines has added a daily service to Houston, Texas, and Air China now offers four weekly departures to  hanghai, adding a second attractive destination in China alongside Beijing. The new intercontinental routes enabled that segment to exceed the overall growth rate in traffic at Munich Airport in the first half of 2014. The number of passengers travelling on long-haul routes increased nearly five per cent to 2.9 million. By comparison, on European routes, passenger numbers were up by one per cent while German domestic routes – with 4.5 million passengers – saw a one per cent decline.

The strong growth in intercontinental traffic also had a positive impact on the freight business at Munich Airport. As the majority of cargo handled in Munich is transported as so-called co-loaded freight on long-haul passenger flights, every new route in that segment means a gain in vitally important airfreight capacity for the Bavarian economy. For four months now, Munich has also had another freight-only connection to Moscow – alongside the cargo flight operated by Atran Cargo Airlines since the beginning of 2014. The new service is operated by AirBridgeCargo Airlines, an affiliate of Atran Cargo, with a Boeing 747 freighter. The strong airfreight results for the first half of 2014 reflect the additional transport capacity available in Munich. Compared with the same period last year, the tonnage handled at MUC was up 4.5 per cent to more than 140,000 tonnes.

Although Munich achieved growth in passenger traffic and freight, the number of take-offs and landings during the first six months of 2014 was down 1.7 per cent to 184,000. The cause of these divergent trends, evident for some time now, is the fact that airlines such as Lufthansa are currently integrating new, larger aircraft into their fleets, which enable them to carry more passengers on fewer flights. For airlines, many of which face serious cost pressures at present, an increase in the number of seats in their aircraft means better profitability.

These fleet upgrades involve enormous expenditures in planning, training and investment, however. As a result, the newly purchased jets will remain in operation for many years. For most airlines, the average operating life of an aircraft is well over 10 years. As a result, an airline cannot continually respond to rising passenger demand by acquiring larger and larger planes. Apart from that, there are of course a huge number of regional connections where using large aircraft could never be economically justified because they would always fly half empty.

Nevertheless, the current decreases in take-offs and landings do not reflect a permanent and irreversible trend. Munich has the need for a third runway in the future. First, the runway system is already subject to bottlenecks today. Not even the recent decreases in aircraft movements have brought any noticeable relief at peak periods at Munich Airport. And secondly, the German government has just released a demand forecast that predicts a 65 per cent increase in air traffic by 2030. That is beyond the capabilities of the existing air transportation infrastructure in Germany.

It is probably no exaggeration to say that the the third runway in Munich will be the last one constructed in Germany for a long time to come. No other German airport has progressed further in the process of getting a new runway built. And at other locations, most of which are surrounded by much more densely populated areas, it will probably become increasingly difficult to implement projects of this kind. Consequently, the expansion of Munich’s runway system is also crucial to the national aviation infrastructure. By improving the hub functionality of Munich Airport, this third runway in Munich will also yield indirectly benefits for other regions in Germany that are linked to destinations all over the world through their connections to the central distribution nodes in Frankfurt and Munich. The better the performance capabilities of the central hubs, the more the regional destination airports will benefit through global connections. That’s why it is essential for Munich Airport to stick to the plan of expanding the runway system.

The second major expansion project at Munich Airport, the midfield satellite terminal for Terminal 2 is much further along, however. At this time the remaining façade sections are closed and the roof completed. By the end of 2014 the first vehicles for the underground personal transportation system (PTS) between Terminal 2 and the satellite will go into position. Construction of the satellite building is due for completion in 2015. Like the original Terminal 2 project, Flughafen München GmbH (FMG) is developing the satellite hand in hand with its strategic growth partner Lufthansa, and once again on a 60:40 basis, with FMG holding the larger share. That is also the basis for allocating the approximately €650 million in costs for the satellite.

The elongated passenger handling facility will increase Munich’s capacity with 52 new gates, 44 passport control points, 20 additional security screening positions – and above all, 27 new gate positions for aircraft. The new midfield terminal will increase Munich Airport’s annual handling capacity by 11 million to approximately 50 million passengers per year. The satellite is also future-ready when it comes to the use of resources. In this project the airport is implementing its ambitious target of reducing energy consumption by up to 30 per cent as compared with the existing terminals.

Another expansion project also relates to energy use: Munich Airport is in the process of replacing its energy facilities and significantly upgrading the output potential of its own power generating resources. A major aspect of these efforts is the renewal of the combined heat and power (CHP) plant, which already produces about 60 per cent of the airport’s electric power, 80 per cent of the heat and the entire baseload air conditioning output to cool the terminal buildings. The high-efficiency combined power, heat and cooling (CPHC) system has already helped to save CO2 emissions of 30,000 tonnes per year as compared with conventional energy generation technologies. With the enhanced efficiency of the new equipment, this will increase to about 40,000 tonnes per year. The upgrade will increase the output of the CHP plant from 18 to 24 megawatts. This can be boosted again to 32 megawatts in a second expansion stage. FMG will invest more than €60 million in its ‘energy program’, which is due for completion by autumn 2015. The investments will also include the new eastern energy centre that will supply all of the electric power and air conditioning needed for Terminal 2 and its satellite facility in the future. Another part of the programme is a new transformer station now going into operation in the west of the airport. It is connected to Munich’s municipal supply network, and provides Munich Airport with a second independent energy source alongside the CHP plant.

Nevertheless Munich Airport doesn’t just invest in quantity. It sees its expansion projects as part of the continuous development of the airport in the interests of greater convenience for passengers and a more pleasant stay, and also for improved sustainability and conservation of resources. The goal is to join the exclusive circle of five-star airports. Munich Airport has put a number of measures in place to meet the exacting criteria defined by the highly respected London-based Skytrax Institute for granting five-star status. One measure for improving the service and enhancing the airport experience was already carried out this summer: Munich Airport offers its passengers and visitors unlimited WLAN access free of charge. Until now, the free service at the airport was limited to 30 minutes. The fact that Munich is on the right track with its quality standards, at least in the eyes of its customers, is confirmed by the results of the 2014 Skytrax survey. According to the ratings of 13 million passengers worldwide, Munich Airport is ranked number one in Europe. And in global rankings, the airport is topped only by Seoul and Singapore.

Dr Michael Kerkloh has been President and CEO of Flughafen München GmbH, Munich Airport’s operating company, since September 2002. He was also appointed president of the German Airports Association (ADV) in 2013. Michael’s aviation career began in 1987 when he joined Frankfurt Airport in charge of operational planning, organisational implementation and the coordination of aircraft handling. In 1995 Michael was appointed to the management team of Hamburg Airport, and simultaneously served as Chairman of the Supervisory Board of Aviation Handling Services. As well as ADV, Michael is a member of the governing bodies of numerous industry organisations including the Airport Council International, the German Aviation Industry Association (BDL), and the Transportation Committee of the Chamber of Industry and Commerce for Munich and Upper Bavaria. He is also a member of the advisory councils of the German National Tourist Board and the Export Club Bayern e.V. Michael has been a member of International Airport Review’s Editorial Board since May 2011.