Iftikhar Ahmad, Director of Aviation at Louis Armstrong New Orleans International Airport, reveals how under new leadership, the airport is excelling in the face of adversity.

On its opening day in 1946, Louis Armstrong New Orleans International Airport (MSY), the first post-war international airport, was the largest commercial airport in the United States, twice the size of LaGuardia or Chicago Airports. Times have obviously changed since then. For example, the first travellers at MSY waited in a Quonset hut without air conditioning and walked across the tarmac to their 21-passenger DC-3 flights. Now MSY can accommodate massive 747s and passengers can park, ticket, check bags, send Louisiana crawfish to their friends, enjoy a beignet and creole coffee and board safely and weatherproof through one of the 42 gates on three active concourses aboard 10 domestic carriers and two international airlines to 42 non-stop destinations with 140 daily flights.

Today, MSY is the primary commercial airport in Louisiana with over 80 per cent of the State’s enplanements, serving the New Orleans and Gulf South region. It is owned by the City of New Orleans and is a self-supporting entity. MSY is a critical asset for the city, state and region and an economic engine with an annual $2.6 billion economic impact providing over 12,000 direct and indirect jobs for residents in many surrounding parishes. In 2012, it had operating revenues of $106 million. The airport’s day-to-day operation is overseen by the New Orleans Aviation Board (NOAB), a nine member unattached board under the executive branch of the New Orleans City Government. The board was established to represent the city in all aviation matters in consultation with state, national and international government agencies.

As time has passed since that opening day in 1946, MSY has lost its position as a leading U.S. airport. This is something the new MSY management team, NOAB board members and a newly-elected New Orleans Mayor, are trying to restore. For decades, indecision and inaction by New Orleans city fathers and planners has prevailed regarding opportunities for growth and relocation. Over the years, they deemed MSY limited with expansion options and oversaw multiple studies to select a new site. Yet no relocation decision was ever made. This indecision put MSY at a competitive disadvantage with other regional airports. While neighbouring airports in Houston and Atlanta grew and moved forward, New Orleans sat still and stagnated. Amid ongoing recovery efforts from Hurricane Katrina in 1995, the former New Orleans Mayor declared MSY “for sale”, either to a private entity or the state, sparking a debate over the value of privatisation versus being publicly-owned. For years, even consensus about what defines “a good airport” could not be decided among the regional stakeholders.

New Orleans Mayor, Mitch Landrieu, was elected in 2010, and the NOAB put in place a new executive team who collectively introduced a new era of forward thinking regarding the airport’s improvements, location and place in the aviation industry. MSY is located within the city limits of Kenner, LA with the longer of its two runways extending into an adjacent parish. This has resulted in a mix of governing authorities at local and state level that have, over the years, sought oversight on the development of MSY. The first move the new leadership sought to bring to the regional stakeholders was a unity of thought and purpose for the future of the airport. This included the introduction of a three-part strategy that eliminated indecision, stabilised the existing airport and set a strategic plan for the future. It was a strategy welcomed by all.

The first part of the strategy was to address uncertainty about privatisation and where MSY should be located. This was accomplished in six months by halting the privatisation process that had been approved by the previous leadership and addressing the decade-old question of MSY relocation. The outcome was that the airport would remain at its present location.

After completing the first part of the strategy, the second phase was immediately enacted to stabilise MSY within a two-year window. This entailed:

There were a number of reasons for this approach. For example, the existing Capital Improvement Program (CIP) needed review for feasibility, necessity and cost. After analysing the CIP, a planned west concourse, hotel and administrative building were put on hold. This paved the way for the $300 million plus CIP to move forward with a six-gate expansion of Concourse D – the largest concourse; an overall apron rehabilitation; collective new construction of a Communication and Emergency Operation Center, Aircraft Rescue and Fire Fighting Facility, Consolidated Rental Care Center with service buildings; and an Airfield Lighting Electrical Vault. The successful modernisation was completed to coincide with the start of Super Bowl XLVII in New Orleans in February 2013.

By this point, the planned two-year strategy had been realised, so the NOAB and city leadership together turned their attention to the third and final part of the plan – the Long Term Strategy. This portion of the plan is designed to enable MSY to regain its reputation as a world-class airport within a seven-year window. It is scheduled to entail:

One might ask why MSY needs a new terminal when it has just spent over $300 million modernising the existing structure. The answer is simple – during the modernisation rehab, a number of issues were identified and confirmed that could potentially present problems in the future. For example, at over 50 years old, the current structure will naturally demand ongoing maintenance. Its aging and inefficient electrical, heating and cooling systems are not cost effective to operate nor will they be in the future; the security checkpoints in their present state are not an efficient way to process the 9.2 million passengers that MSY handled in 2013 – a consolidated check-point would be better; the absence of an In-Line Baggage Screening system limits the screening time for passenger baggage, a new terminal would make one possible; and the imperfect concessions setup post- and pre-security that exists because of unconnected concourses has a direct impact on the non-airline revenue stream.

That said, however, the decision to build a new terminal is a strategic business move to further improve the economic value of the airport to our communities. It is not a project in response to outgrowing the existing terminal and needing more space. Neither is it a decision based in aesthetics. It is the result of a plan to increase non-airline revenue, decrease airline costs and gain more air service as a result so that our community through air service would be better connected with the rest of the world. Better connectivity through air service has brought significant economic development to cities like Atlanta, Chicago and Houston and we wish the same for our region.

Forward progress on the development of the new $826 million North Terminal has taken flight. On 16 January 2014, Mayor Landrieu joined the NOAB and the Long Term Infrastructure Development Project Team to showcase the conceptual renderings of a new north terminal complex that was a site selection favourite from four options that Mayor Landrieu wanted studied. The terminal concepts are the creation of world renowned architect Cesar Pelli, New Orleans’ William Raymond Manning of Manning Architects, Atkins Global and Leo A. Daly, the project design team for the north terminal project. The new ‘World Class’ north terminal conceptual renderings and terminal animation can be viewed on the MSY website: www.flymsy.com.

On 30 December 2013, prior to the design reveal, another major step paved the way for the terminal project to move forward. On this date, the Federal Aviation Administration (FAA) issued a Finding of No Significant Impact/Record of Decision (FONSI/ROD) for the Environmental Assessment completed in connection with the proposed relocation of the main terminal complex at Louis Armstrong New Orleans International Airport. Next to come will be the funding of the project. Funding sources may include grants from the Federal Aviation Administration Airport Improvement Program, Transportation Security Administration and the Louisiana State Aviation Trust Fund, as well as Passenger Facility Charge collections, General Airport Revenue Bonds and Aviation Board Capital Funds with no investment by the City of New Orleans.

The new terminal is expected to create over 13,000 jobs in construction along with numerous business opportunities for local and Louisiana businesses. This project will serve as the catalyst for achieving all of the Long Term Strategy goals while addressing the concerns of maintaining the existing structure. The new terminal will place more business activities on the post-security side of the terminal, thus increasing non-airline revenue. The operation efficiency of the new terminal will reduce costs to the airlines by lowering the CPE even further. With the new terminal complete, the existing terminal may then be repurposed for intermodal activity, a future plan that will have a positive impact on the entire region. Furthermore, a plan to possibly redevelop the existing terminal for general aviation or charter airline use is an opportunity that would not exist if the NOAB had opted to renovate rather than build a new terminal.

Once completed, in May 2018, the North Terminal will be the highlight of many accomplishments realised since the arrival of new leadership in 2010. A summary of their successful accomplishments can be found on page XX.

Looking back since the opening day of Louis Armstrong New Orleans International Airport, a great deal of change has taken place. But the best is yet to come. Today, the present beams even brighter for MSY – it is soaring towards a future that is now boarding.

Iftikhar Ahmad is the Executive Director of the New Orleans Aviation Board that oversees Louis Armstrong New Orleans International Airport. He took the helm of Louisiana’s largest airport in May 2010. His vast airport experience includes management and oversight of billion dollar capital programs and millions in airport operating revenues. 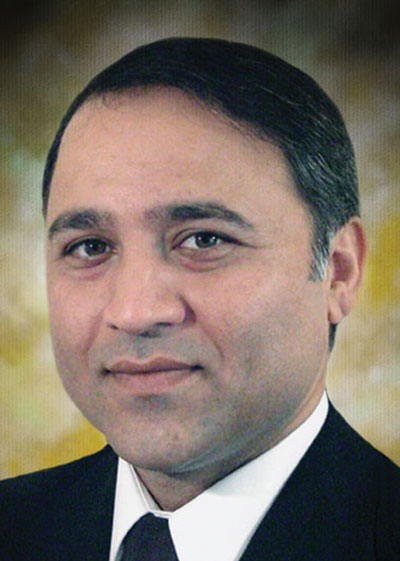