Air Freight: FIATA in Bali and beyond

FIATA, the International Federation of Freight Forwarders’ Associations, has trade facilitation in its DNA. It seeks to contribute to the UN Sustainable Development Goals process with emphasis on ‘logistics connectivity’, which the freight forwarding and logistics industry provides to international trade. In this light it has raised its appeal to the level of the United Nations.

As one of the oldest and largest transport-related organisations in the world, FIATA must respond to these high level questions that global trade imposes. With constituencies comprising freight forwarding, logistics, transport and customs service providers, FIATA speaks on behalf of some 40,000 enterprises in 164 countries. FIATA’s statutory goals and collective efforts are to improve the standards of the logistics industry by working effectively to improve trade facilitation, provide appropriate training and promote good practices. Today more than ever before, logistics has assumed a central role in shaping the competitiveness of international trade, and traditionally FIATA has always been active in the air freight sector, with its specialised body, which I have the honour to preside. In this light FIATA has viewed the recent Bali agreement with an articulated perspective.

FIATA is very pleased with the results of the Ninth Ministerial meeting of the World Trade Organisation (WTO) in Bali, in December 2013. FIATA had the opportunity to participate in this ground-breaking session with a technical briefing held jointly with IATA to tactfully promote the Montreal Convention 1999 (MC99) ratification. MC99 permits the use of electronic records in air freight, thus enhancing facilitation with positive effect on the cost, efficiency and sustainability of the air cargo supply chain. The joint statement is available on the FIATA website.

Only 103 state parties signed on and ratified MC99 to date, leaving 46 per cent of ICAO Member States behind. This leaves a significant gap in the global market and makes it difficult for those economies to break the digital divide in regards to air cargo. Most notably among the key markets that have yet to ratify MC99 are: Bangladesh, Indonesia, Philippines, Russia, Sri Lanka, Thailand and Vietnam. These are markets that have a rather big share in world trade and might be failing to reap all the expected benefits of e-commerce without such ratification.

So that was our pitch, but the Bali agreement is about trade facilitation not limited to air freight.

A large section of the agreement focuses on the importance of transparency, particularly with regards to customs procedures. In this light we take the view that the work that has been completed so far at the level of the WCO, and the instruments made available by the Revised Kyoto Convention, have a significant role to play in the implementation of a far-reaching and binding agreement such as Bali’s.

Delving a little further into the details, we can see that in Section 1 Article 1 the agreement states that publication of all information in regards to customs procedures, fees, duties, restrictions, administration, forms and all other customs information will be transparently revealed and easily accessible by all Member States. Articles 2, 3 and 4 in Section 1 further stress transparency by asking each Member State to openly report on any future changes that would affect trade. Articles 5 and 6 seek to establish a system of controls for ensuring the transparency of information and that all Member States are openly publishing updated information on fees and charges. Other articles in the agreement seek to improve efficiency and will have a large effect on the air freight industry. Article 7 aims at making clearance faster through electronic payment of duties/taxes/fees and developing a risk management system with post-clearance audits to reduce the time it takes to clear customs/security. Articles 8 and 10 continue to aim at improving efficiency by encouraging work with border agencies of other countries and promoting a single window approach.

This agreement is much lauded by FIATA. Not only does it make significant advances in trade facilitation, which is projected to add as much as $1 trillion to the global economy, the ‘Bali Deal’ is a binding instrument and this is a game changer. In this light a ratified MC99 is one of the principal enablers to achieve the much desired facilitation trade needs. There are other key conventions that can greatly enhance trade facilitation, but looking at air freight we believe the combination of the MC99 and the Revised Kyoto Convention3 would provide Member States with many of the instruments that the Bali agreement expects them to put in place. This would also play a significant role in opening the possibility to several additional Mutual Recognition Agreements in areas of cooperation such as security, controlled goods, etc. For example, taking advantage of regional economic cooperation groups (ASEAN for example), implementing a single common agreement for all 10 countries would make the process easier and eliminate the need for individual agreements, greatly benefiting the region’s trading community.

All this being said we certainly would accept that the same transparency that the agreement imposes on Member States among themselves is equally extended to the Private Sector. In particular this applies to those who must implement and provide trade facilitation to the traders’ community on a daily basis, i.e. freight forwarders and logistics service providers, the sector FIATA proudly represents. This is a challenge in a period when transparency is available, but it is not always achieved in the same degree and with the same level of penetration. A second challenge in our view will consist in resisting the temptation to re-start all processes from scratch. This is indeed a new agreement and indeed a binding one, as opposed to others that do not have such binding nature; however, we all know that between signing an agreement and bringing it to fruition there is a gaping period of time. Our view is that the time required would be significantly abbreviated by making use of all existing instruments that are already available, whether coming from the WTO itself or other agencies such as ICAO, IMO and the WCO, albeit not a UN body, however represented in 179 countries at ministerial level.

To conclude our message, we have always worked in favour of trade facilitation because it made a lot of sense and now we must do so even more effectively knowing that we have binding reasons for doing so.

Rodolfo Sagel began his career in international freight forewarding in 1969 working for the Argentinian branch of Messrs. A. Hartrodt GmbH of Hamburg, Germany. He rose to the position of CEO and co-proprietor for this branch and served as the Director of A. Hartrodt Transportes Ltda in addition. Since 1992, Rodolfo has been the President of Eaff S.A. Argentina; an international freight forwarder and customs broker. Here he equally shares the ownership with his longstanding partner. Rodolfo has also served on the boards of many organisations in the field of freight forwarding and international trade, including the Argentine Freight Forwarders Association and the German-Argentinian Chamber of Commerce. He began his association with FIATA in 1998 and was elected for his first term as a FIATA Vice President in 2001. Since 2005, Rodolfo has served as the Chairman of the FIATA Air Freight Institute. 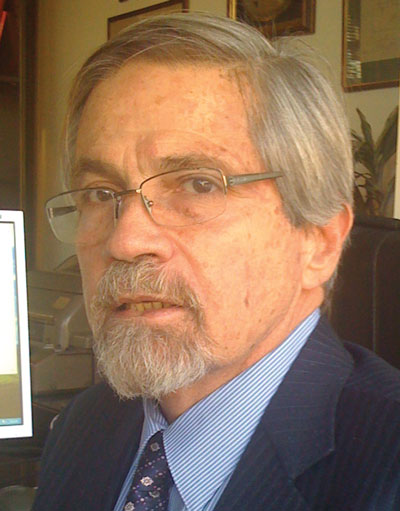