Air traffic keeps growing along with passengers’ expectations of its quality. Therefore it is a major challenge for the future of air traffic management to ensure smooth air traffic with the increasing volume in the European airspace. A-CDM (Airport Collaborative Decision Making) is a strategy for improved coordination of on-the-ground processes for major airports – including Düsseldorf Airport, which implemented the strategy in April 2013.

A-CDM facilitates better coordination between partners and decisions pertaining to aircraft handling by keeping all people and data constantly connected, including airport, flight security, airlines, handling companies, and EUROCONTROL. Hence, A-CDM is an integrated approach to optimising existing airport infrastructure by working with all individual elements in air traffic as one interconnected system. Air-to-air activities are connected with data and activities, and the key to success is transparency and exchange of information.

The introduction of A-CDM at Düsseldorf Airport is a joint initiative by Deutsche Flugsicherung GmbH/German Air Traffic Services (DFS), EUROCONTROL, and airport management. All processes are coordinated, resources planned, and potential weaknesses identified early on and addressed.

Düsseldorf’s A-CDM is linked to the Network Management Operations Centre (NMOC) in Brussels for automatic transmission of expected departure times. Departure Planning Information provides more flexibility and precision in the integration of aircraft takeoffs from Düsseldorf within the European air traffic space and better use of existing capacity.

A-CDM breaks down aircraft handling into time-tagged steps, making it possible for all partners to plan their steps optimally. For example, the Target Off-Block-Time (TOBT) applies to all flights and defines the targeted point in time at which the aircraft’s ground handling is supposed to be finished, its doors closed, and the passenger bridge removed. That time is set by the airline and is transmitted to the A-CDM system. A sequence planner then computes the ideal event sequence on the tarmac and determines a time window for engine start-up – the Target Start-up Approval Time (TSAT). This is provided to all partners of a flight event (including air security, airport management, airlines and ground handling).

By following this procedure, the current flight circumstances and variables at a particular airport – such as taxiing time, capacity limits, or de-icing procedures – can be captured much more precisely. Not only does the outbound on-time quality increase, but more realistic inbound projections are another positive effect due to continuous ‘Flight Update Messages’ from NMOC. These data are invaluable for everyone involved, as the certainty of time management is greatly increased.

With more reaction time before a landing in Düsseldorf, everyone is more successful, including ground handling, airlines, and central air traffic control. The application of A-CDM means that all partners now know which aircraft have received clearing for engine startup and when about 40 minutes before TOBT.

There are other benefits to A-CDM besides easier planning and better partner corporation; for example reduced engine operation times and subsequent reductions in CO2 and NOx emissions and noise pollution, more flexibility during operation malfunctions, shorter on-tarmac wait times, and of course client satisfaction – which is found through improved products and quality through Europe-wide continuous and automated data exchange.

Düsseldorf is the sixth European airport – after Munich, Frankfurt, Brussels, Paris, and Helsinki – to introduce the system developed by EUROCONTROL. The implementation of A-CDM is also an investment in the airport’s on-time performance, as well as an effective enhancement of its local Airport Control Centre (ACC).

The ACC – an ultra-modern control room – facilitates an even more efficient collaboration of all departments involved in flight operations. A staff of around 15 experts, including representatives from the airport, airlines, federal police, and handling companies, work together in one room and keep in constant contact with German Air Traffic Services and the German Weather Service – a further investment by the airport into process optimisation and improved on-time performance records.

The ACC inside the terminal building employs sophisticated software systems. Its key elements are a unique program for traffic monitoring and projecting called ‘Performance Manager’ and ‘Airport Map’, an interactive airport map displaying real-time events. Moreover, the ACC is capable of incorporating additional data such as weather, flight plan, and area camera views on a more than 50-foot wide monitor.

Düsseldorf Airport invested around €3 million in its ACC and, hence, in the optimisation of its on-ground activities and improvement of on-time performance. The smoother interaction of the numerous aircraft handling-related events that happen in sequence or simultaneously is especially helpful in facilitating on-time departures and minimising the build-up of delays throughout the day. In cooperation with the airlines and other partners, Düsseldorf Airport undertakes great logistical and financial efforts to avoid flight delays. The ACC is a major component in this effort, and residents and passengers benefit greatly.

Stefan Beitelsmann has been working at Düsseldorf Airport since mid-2000, initially in security technology then as Deputy Director of the Department of Planning and Construction. From there Stefan moved to flight operations and has been Head of Aviation and Central Infrastructure Management for 4.5 years. In his current position, Stefan and his team work on implementing various IT systems including AODB, RMS, ACC and A-CDM. Prior to joining Düsseldorf Airport, Stefan had been on the officer career track for the German armed forces and had studied electrical engineering at the military university in Munich 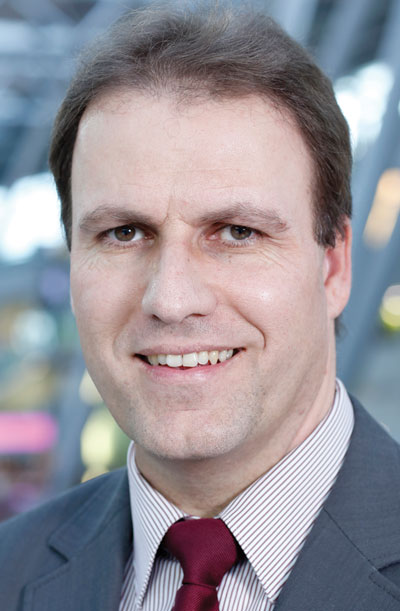