GATE, the German umbrella association for airport suppliers has renewed its commitment to the inter airport and looks forward to the industry’s technological future. Tuesday 06 October 2015 marked the start of the 20th inter airport Europe exhibition displaying equipment and technology from the airport industry. To mark the occasion, joint initiator of the fair […] 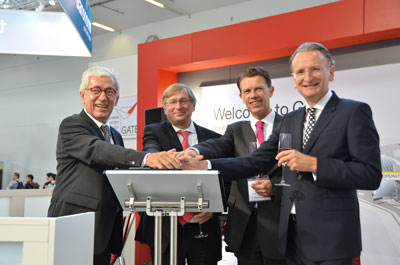 GATE, the German umbrella association for airport suppliers has renewed its commitment to the inter airport and looks forward to the industry’s technological future. Tuesday 06 October 2015 marked the start of the 20th inter airport Europe exhibition displaying equipment and technology from the airport industry. To mark the occasion, joint initiator of the fair and President of German Airport Technology & Equipment e.V. (GATE), Dieter A. Heinz, met with ADV President Dr. Michael Kerkloh and ADV Chief Executive Director Ralph Beisel, and Stephen Brooks, Chairman of Mack Brooks Exhibitions, at the GATE association booth to reminisce on 40 years of the trade fair, and look ahead to future technological advancements in the industry.

From parking lot to industry-leading fair

For the GATE association the 20th inter airport Europe is a very special edition. “Can you imagine? What is today inter airport started 40 years ago with used airport ground equipment on picnic tables in a parking lot at Frankfurt airport,” recalled Dieter A. Heinz in his opening address in Munich. Today, the fair serves airport operators as the first port of call for the latest developments and services for ground handling, terminal equipment and IT, as well as airport architecture and interiors. The GATE association, with its many partners in the airport supply industry, played a large role in the growth of the fair into an event where this year 676 exhibitors from 44 countries met at the Munich fair grounds from 6-9 October. To maintain the close relationship between long-time organizer Mack Brooks Exhibitions and GATE, Dieter A. Heinz and Stephen Brooks signed a renewed cooperative agreement at the booth. “With inter airport in China and Singapore and the main event in Munich, it is very important to us to keep our close contacts to the German airport equipment industry. We have greatly appreciated the support and advice of GATE since the early days of inter airport. With this in mind we are very glad to be continuing the cooperation with GATE for the long term,” said Stephen Brooks.

Progress for the airport of tomorrow

As passenger numbers increase, so do demands for airport comfort and the speed with which they get things done

Airports connect and move people – literally and figuratively. As passenger numbers increase, so do demands for airport comfort and the speed with which they get things done. Just like inter airport, the GATE association is dedicated to meeting the challenges of airport technology, equipment and services. GATE is also the first place to turn for new construction and modifications at airports, making it a gateway to the most innovative companies and an information and new technology development hub. The entire industry benefits from this knowledge pool. Accordingly, a partnership between GATE and the ADV is forming. “As the representatives of the interests of airports, we will face many challenges in the coming years. These will be of a technical nature, such as the ongoing digitalization, as well as in the area of passenger satisfaction. For both, we depend on the development and commitment of our vendors. With the members of the GATE association we can work towards goals like passenger convenience and the Green Airport. We look forward to intensifying the information flow between the two most important industry associations, for example at joint innovation forums in 2016,” said Ralph Beisel about the advantages of the cooperation.

In conclusion, GATE believes, the 20th inter airport Europe has shown once again that it takes the cooperation of all concerned to meet the needs and desires of today’s passengers and tomorrow’s airports. “The demand for intelligent and sophisticated products and services is rising rapidly. The entire industry is challenged to develop new ideas and innovative technologies of the highest quality. GATE bundles deep expertise and makes it available in projects worldwide. At inter airport, we and all the other exhibitors are sources for airports, to define needs, get new ideas and drive progress,” said Dieter A. Heinz in summarizing the future function of the GATE association and the industry as a whole.