Blighter Surveillance Systems, a British electronic-scanning radar and sensor solution provider,has been selected to supply its Blighter B400 Series e-scan radars to secure the perimeter of a strategic air base in the Middle East… 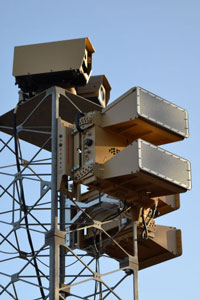 Blighter Surveillance Systems (www.blighter.com), a British electronic-scanning radar and sensor solution provider,has been selected to supply its Blighter B400 Series e-scan radars to secure the perimeter of a strategic air base in the Middle East. The contract was awarded to Blighter by Unlimited Technology, Inc., a security market systems integrator based in Chester Springs, Pennsylvania. The contract value was not disclosed. The Blighter passive electronically scanned array (PESA) radars will form part of an integrated perimeter security system at the Middle Eastern air base and this will include a long range illuminated camera system for day and night operation. Blighter will also supply its BlighterTrack multi hypothesis software-based radar target tracker and its BlighterView HMI 2 control system to display the radars and to cue the camera systems. This configuration is known as Blighter Guardian. A ‘Sensor Node’ from Unlimited Technology will integrate the complete sensor suite and control electronics into a comprehensive ‘plug and play’ package for ease of installation by the local integrator.

Brent Franklin, president, Unlimited Technology, Inc., said: “We needed a field-proven robust and reliable e-scan radar system for a strategic airbase security solution in the Middle East. It was vital that the solution was maintenance free and offered 24-hour all-weather capability, low false alarm rates and had the range to look beyond the perimeter to provide the early target detection that our customer required. Blighter was able to meet our needs in full and demonstrate similar successful deployments – for example, by the British Army for forward operating base security and by the Koreans along the demilitarised zone (DMZ).”

Mark Radford, CEO, Blighter Surveillance Systems, said: “We are delighted to see yet another military air base adopt our Blighter surveillance solution. Our solid state PESA electronic scanning radar technology has no mechanical moving parts to wear out or to get contaminated by sand or dust and therefore it’s ideal for the dusty and arid conditions found in the Middle East. Importantly, our radar is also visually covert and virtually maintenance free.”

Blighter Guardian is designed for securing airbase perimeters and forward operation bases (FOBs) and provides a 24/7 all-weather persistent surveillance capability in the toughest of conditions. Blighter Guardian detects small and slow moving targets – even in cluttered environments – due to the radar’s coactive frequency modulated continuous wave (FMCW) Doppler fast-scan processing. The radar can detect a walking person at 11km (6.8 miles) or a large moving vehicle at 25km (15.5 miles) and then cue the camera system to follow and identify targets.

Blighter will be demonstrating its Blighter Guardian and other surveillance solutions at The International Defence Exhibition and Conference (IDEX 2015), at the Abu Dhabi National Exhibition Centre (ADNEC), Abu Dhabi, UAE, (Stand 05-C16), from 22 to 26 February 2015.