Crisplant BHS in operation at the new Hamad International Airport 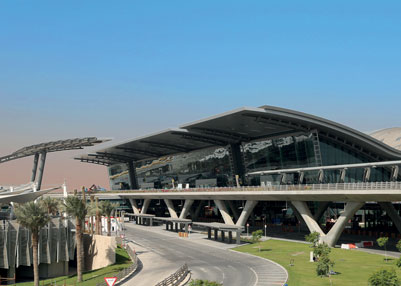 To achieve its goal of exceptional baggage handling, with the shortest possible connection times between flights and no lost baggage, the airport engaged Crisplant – part of BEUMER Group and a leading global supplier of automated material handling systems – to supply a high-speed solution with the capacity to sort 19,500 bags per hour.

Handling baggage for an initial 24 million passengers per year, expected to rise to 50 million per year when the airport is fully operational, requires a specially designed system. The Crisplant system is fully redundant, having two tilt-tray sorting systems with a total of 28 inductions, 172 chutes and 22 make-up carousels. This guarantees that, even in the unlikely event of sorter downtime, passenger bags for this major airport hub, which will handle 80% of its traffic as transfers, will continue to be processed on schedule, with no flight-delaying holdups.

To further streamline the transfer bag process, there are 1,750 fully automated early bag storage positions located below sorter system loops for efficient and timely release and make-up based on flight or time slots.

In addition to this baggage handling system having a notably high capacity, it is also distinguished by having the world’s largest plug-and-play integrated hybrid RFID-barcode scanning system.

The State of Qatar’s future plans for Hamad International Airport include opening a second terminal in time for the FIFA World Cup in 2022 and the transformation of the area around the new facility into an airport city.

By BEUMER Group UK with Crisplant