Glasgow Airport has recorded its busiest year since 2008 after more than 7.7 million passengers travelled through its doors in 2014, representing an annual increase of 4.8%… 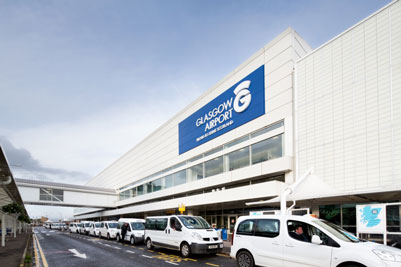 Glasgow Airport has recorded its busiest year since 2008 after more than 7.7 million passengers travelled through its doors in 2014, representing an annual increase of 4.8%.

It was the airport’s fourth consecutive year of growth and it was able to report an increase in both domestic and international traffic which grew by 2.6% and 6.9% respectively. December’s performance ensured Glasgow Airport ended what was a hugely eventful year on a high. Almost 520,000 passengers travelled through the airport during the month, an increase of 13.5%. Domestic traffic grew by 11% with international up 17%.

Glasgow Airport secured 20 new routes and services during 2014 and a number of airlines including Aer Lingus, Icelandair and Wizz Air all added extra capacity. In October, the airport welcomed Ryanair on board for the first time and the airline is expected to bring an additional 850,000 passengers per year.

Amanda McMillan, managing director of Glasgow Airport, said: “2014 was a remarkable year for Glasgow Airport and our performance exceeded all expectations. We have now recorded four consecutive years of growth and have succeeded in attracting 1.2 million additional passengers since 2010.

“The final quarter of 2014 was particularly strong and we start the New Year in an excellent position. Having succeeded in securing 20 new routes and services in 2014, we fully expect to move back above eight million passengers this year.

“2014 was punctuated by a series of landmark events for the airport. In April we became the first Scottish airport to welcome the A380, in July we marked the completion of a £20 million investment programme and we went on to play our part in welcoming the thousands of visitors who descended en masse for the Commonwealth Games and the Ryder Cup.

“With events such as the Turner Prize, the World Gymnastics Championships and the European Judo Championships already confirmed, 2015 promises to be yet another special year for Glasgow.”