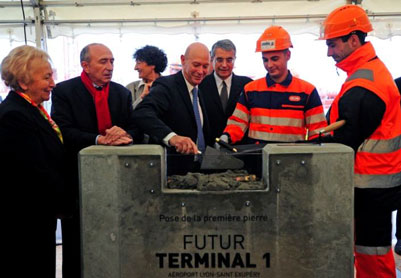 Philippe Bernand, Chief Executive Officer of Lyon Airports and Alain Loyer, Chief Executive Officer of GFC Construction, have laid the first stone of the future Terminal 1 on Friday 12th of December, in the presence of Jean-François Carenco, Prefect of the Rhône-Alpes region and Prefect of the Rhône area, Gérard Collomb, Senator-Mayor of Lyon and President of Greater Lyon, Jean-Jack Queyranne, Chair of the Rhône-Alpes Regional Council and a former minister, Danielle Chuzeville, Chair of the general Rhône Council, Claire Dreyfus-Cloarec, Chairwoman of the Lyon Airports Supervisory Board and Graham Stirk, head architect and partner of the firm, Rogers Stirk Harbour + Partners. Designed by the architectural firm, Rogers Stirk Harbour + Partners, the future Terminal will cover a surface area of 70,000m², double the surface area of the current terminals. This will enable Lyon-Saint Exupéry Airport to welcome 15 million passengers by 2020. This major project meets 4 key objectives focused on quality of service, increasing competitiveness through operational efficiency, developing non-commercial revenue and increasing the capacity to welcome air operators which are developing at Lyon-Saint Exupéry.

The terminal will give the airport a new dimension. With a total capacity of 10 million passengers, the building, in compliance with HQE® standards, will welcome the growing low cost traffic at the airport, in addition to traffic from traditional airlines. Using innovative equipment, the terminal will meet passengers’ expectations, while responding to new passenger consumption patterns. An extension to the existing Terminal 1, it will eventually be connected, via an underground gallery, to the current Terminal 3 boarding satellite (operational since November 2011). The existing metal-fabric section of Terminal 3 will be demolished in the summer of 2016. The outside areas on the “city side” will incorporate a pedestrian esplanade and infrastructures required for all ground access points.

The project, including the terminal building, the exterior, aircraft parking and facilities, represents a total investment of €180 million, €140 million of which is to be spent on building work. The European Investment Bank is providing 5-years’ worth of funding for the programme with a total loan of €140 million. The building work will be split into two phases: the first phase will consist of building the new terminal, the second will involve connecting it to the existing Terminal 1.

The construction work, which is being led by GFC Construction (representative) in partnership with Quille Construction and Bouygues Energies & Services*, will be managed by Chabanne + Partenaires. They will make 350 people available over the busiest periods and will partner with many local businesses, 75% of which are the fabric of the regional economy.