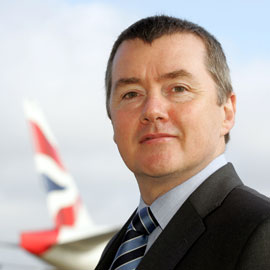 Rises in Air Passenger Duty mean that a family of four flying to a destination outside Europe will soon pay £284 in tax, compared with just £40 when the levy was introduced on November 1, 1994. That seven-fold increase in Air Passenger Duty has taken place while inflation has not even doubled over the same period. Air Passenger Duty, which is the highest aviation tax imposed anywhere in the world, has also hugely outstripped other UK taxes such as petrol duty, road tax, duties on alcohol and insurance premiums over the last two decades.

According to City analysts PwC, abolition of Air Passenger Duty would boost Britain’s economic growth by 0.5 per cent within a year and lead to the creation of 60,000 new jobs without reducing the Treasury’s net revenues.

Willie Walsh said: “Twenty years on, Air Passenger Duty has snowballed out of control and become a tax that works against people wanting to visit relatives and friends, go on holiday or grow their business to create jobs.

“Air Passenger Duty is way out of line with both other indirect taxes in the UK and flight taxes in other countries. Globalisation has accelerated enormously in the last 20 years. This tax helps no-one in today’s economic environment. We must call time on Air Passenger Duty.”