Intelligence-Sec’s leading CBRNe Summit Europe conference and exhibition is just 2 months away. Do not miss out on being part of Europe’s largest gathering of CBRNe experts from across EMEA and the US… 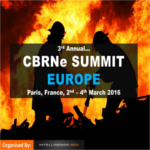 Early bird expiry dates – 31st January 2016 Book before the end of the month to receive a discounted price off the registration fee.

Intelligence-Sec’s leading CBRNe Summit Europe conference and exhibition is just 2 months away. Do not miss out on being part of Europe’s largest gathering of CBRNe experts from across EMEA and the US.

CBRNe Summit Europe is the only CBRNe related event in Europe officially supported by the NATO Joint CBRN Defence Centre of Excellence who provide input in the agenda and invite senior officials to participate. The Scientific Partner for the event is The Observatory on Security and CBRNe Defence – OSDIFE.

Taking place in Paris this year will allow you to meet with leading officials from the French Government, Law Enforcement Agencies and Emergency Services who have had to respond to a series of terrorist attacks in the last year. Being part of our international event will provide you unrivalled access to first responders who have been on the frontline dealing with terrorist attacks.

You will have the opportunity to hear presentations from the following officials during the two day conference:

Running alongside our conference will be an exhibition full of leading CBRNe vendors showcasing their latest products and technologies:

One the 4th March 2016, there will be two associated workshops focusing on “CBRN Intelligence” and “Multifunctional Remote Controlled Systems Combating IED/EOD & CBRNe Threats”