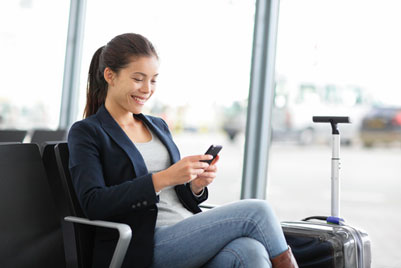 European air passengers are among the most satisfied, according to a new survey from air transport IT specialist, SITA. The 2014 SITA/Air Transport World Passenger Survey reports that 82% of European passengers are highly satisfied with their travel experiences due to advances in technology.

Speaking from the Europe Aviation ICT Forum 2014 in Amsterdam, Dave Bakker, SITA President, Europe, said: “SITA’s survey highlights both the major role and the positive impact that technology is having on European passengers’ travel experiences. While passengers have already begun embracing mobile apps, self-service check-in kiosks and web technology, we expect to see continued growth in these areas in the years ahead.”

The majority of European passengers take their technology on the road with them when they travel, with an average of 80% carrying a smartphone. Within Europe, passengers in Spain carried the highest percentage of smartphones at 90%, followed by 83% in Russia and 78% in Germany. A growing number of passengers in Europe carry as many as three mobile devices when they travel—smartphones, tablets and laptops. Russia topped the list of passengers travelling with all three devices at 17%, followed by France at 15% and Spain at 13%.

We can expect to see significant growth across all European markets in the percentage of passengers who will regularly use web, phone and kiosk check-in over the next 12 months. The greatest growth in all markets except France, where passengers prefer self-service kiosks, will be in smartphone apps. Nearly 90% of Russian passengers said they would use more smartphone apps, followed by two-thirds of Spanish and German passengers respectively.

Smartphone apps are particularly appealing for directions and way finding, with half of European passengers surveyed saying they would definitely use these apps in the future. Around 40% said they would definitely use their smartphones as identification and for access to boarding gates, airline lounges and other areas.  According to the survey, Russia and Spain lead the way in their intentions to use these smartphone apps in the future, followed by the UK, France and Germany.

The 9th annual SITA-ATW Passenger Survey was conducted across 15 countries worldwide with nearly 6,300 participants.  The 15 countries involved in the survey represent 76% of total global passenger traffic.