BIAL’s 4.95km airport section of the ORR-Airport Metro will connect Kempegowda Airport’s terminals with the Central Silk Board Junction. 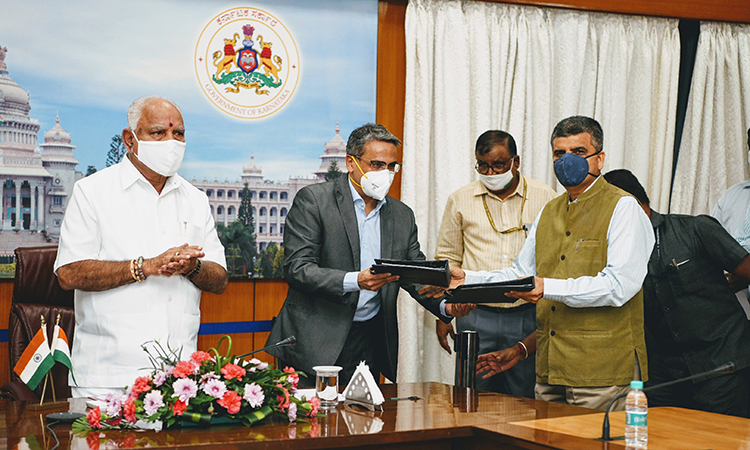 Hon. Chief Minister Shri. B S Yediyurappa in the presence of Shri. Hari Marar, MD and CEO of Bangalore International Airport Limtied (BIAL), and Shri. Ajay Seth, MD of Bangalore Metro Rail Corporation Limited (BMRCL) at the signing of the MoU between BMRCL and BIAL.

Bangalore Metro Rail Corporation Limited (BMRCL) and Bangalore International Airport Limited (BIAL) have signed a Memorandum of Understanding (MoU) to take forward their joint efforts by way of a unique Public Private Partnership (PPP) with an innovative financing mode to establish the 4.95km airport section of the ORR-Airport Metro.

This Metro connectivity to Kempegowda International Airport Bengaluru (BLR), likely to be commissioned by December 2024, would provide a sustainable and efficient mode of transport to the residents and business commuters from all parts of the city, facilitating the city to realise its economic potential and ease traffic congestion on the roads leading to the airport.

BMRCL will construct the airport Metro section, as well as undertake the civil and electro-mechanical works and other associated facilities, works and related assets. BIAL will develop, manage and maintain the two Metro stations that will be located within the airport boundary.

This airport section is a part of the total 56km Metro line, named ‘ORR-Airport Metro’, from the Central Silk Board Junction to Kempegowda International Airport terminals via KR Puram and Hebbal. The ORR-Airport Metro is being established by BMRCL and is likely to serve 780,000 commuters each day. The two stations within the airport boundaries are likely to see a daily ridership of 60,000 commuters in 2024, increasing to 188,000 commuters by 2041.

The civil work on the airport Metro section is expected to commence in March 2021. The tenders for the civil works of the 56km Metro viaduct and 30 stations have already been called in five packages. The work on the first two packages from Central Silk Board Junction to KR Puram are likely to commence in December 2020, and the three packages from KR Puram to the airport are likely to commence in March 2021. The airport section and the section from Hebbal to the Trumpet Junction will be prioritised.

Almost two-thirds of the 94 acres of land required for the ORR-Airport Metro has been acquired and handed over to BMRCL. The balance land is mostly for the Metro depot near the Trumpet Junction. The shifting of utilities – namely electricity, water, streetlights, gas and telecom – is underway by the concerned agencies.

Managing Director and Chief Executive Officer of Bangalore International Airport Limited, Shri Hari Marar, said: “At BIAL, we are extremely excited to participate in enabling Metro connectivity to and from Bangalore Airport, creating the potential for easy access between Bengaluru and the airport. There is an increasing need to offer seamless experiences, and BIAL is committed to offering travel options to simplify the passenger journey.”