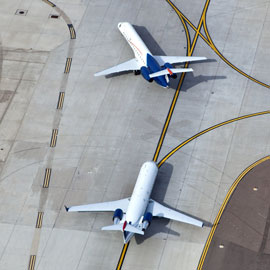 In the last 20 years, the number of flights has doubled at the busiest international airports – an increase that has not been matched by infrastructure development at the same facilities. Some airports have reached their capacity limit already, leading to frequent airside and terminal congestion, flight delays and higher fuel consumption.

Improved processes in the sky and on the ground are paramount if the growth in passenger numbers is to be accommodated safely and economically.

For example, airports can reduce taxiing time by leveraging existing technologies to optimise traffic control. And the benefits extend beyond a boost in efficiency; there are direct financial implications as well. Moving planes to and from the apron accounts for an average 4% of fleet fuel consumption for short haul airlines operating single aisle aircraft from congested airports.

When visibility conditions degrade, pilots are less capable of following the cleared taxi route, in addition to seeing and avoiding each other. Even in cases of improved visibility, it is often challenging at large airports to recognise the allocated rollway quickly and safely. Due to complex layouts and unclear radio communications, there is a significant chance of runway incursion incidences.

However, improved capacity and enhanced levels of safety can be achieved through the adoption of intelligent guidance procedures, such as ‘follow the greens’, where advanced surface movement guidance control systems (A-SMGCS) can be built using hardware and software that are already available.

These systems use taxiway lighting to direct the crew and the aircraft. Each segment of taxiway needed is switched on. All other areas not needed are switched off.

By utilising A-SMGCS, taxiing times can be reduced and can be better scheduled. Conflict-free, continuous taxiing reduces fuel consumption, cuts associated costs, and reduces damage to the environment caused by pollutant exhaust and engine noise. It provides pilots unfamiliar with their location with a safe orientation, even in cases of reduced visibility. It improves the safety of runway traffic by a more even distribution of the load on the taxiways, and an early recognition and resolution of conflicts.

This kind of system was adopted as part of a ground traffic management system by Incheon Airport in Seoul in 2009 and has helped to generate significant operational benefits. Last year, a five-day validation exercise at Frankfurt Airport involving pilots from 20 airlines reduced the time needed to guide planes around the airfield, results that were evaluated and verified by SESAR European Airports Consortium (SEAC) post event.

Further simulation exercises are planned with other major European airports in order to develop continent-wide standards, but the indications are positive and the message is clear. It’s time to make the most of what we have: to leverage siloed communications, navigation, surveillance/air-traffic management (CNS/ATM) systems, in order to expand capacity and to enhance safety. Raghu Seelamonthula has been in the industry for 15 years and has spent the past seven years with Honeywell. He is a global advocate and subject matter expert for airside integration technology and the benefits it can provide to airports, airlines, air navigation service providers, communities, and the flying public. Raghu holds undergraduate engineering and graduate business administration degrees from Osmania and Sri Satya Sai universities respectively.